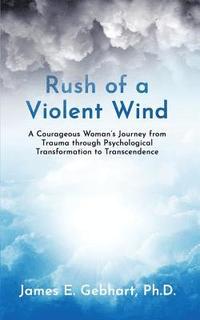 Rush of a Violent Wind

chest and pistol-whipped her after the gun which he put in her face misfired. He then eluded police and contacted

her a year later with a promise to find and kill her and her infant daughter.

It required several years, the expertise of a highly-skilled psychiatrist, and indomitable courage for her to reconstruct her shattered life and finally emerge into public life as a physician.

When critical illness ended her career, she experienced a transcendent vision, and reported being transported to a

place beyond finite time and space, deep into Divine mystery.

She returned with an eternal perspective on good, evil, and forgiveness?a cosmic epiphany vigorously analyzed and debated in the dialogue between a university psychology professor and her own psychotherapist who is also a theologian.

James E. Gebhart, Ph.D. is both a United Methodist minister and a Clinical Psychologist. He has been in independent practice for thirty-five years. He wrote this book to share Elaine?s inspirational and moving story.