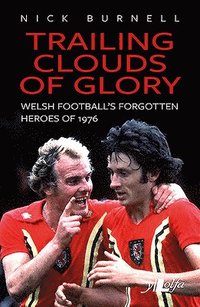 Trailing Clouds of Glory - Welsh Football's Lost Boys of '76 is an attempt to shine some light on a little-known slice of Welsh football history from the mid 1970s. It details the two-year period during which Wales went from being 'also-rans' and wooden spoon winners in the Home International table for four years in a row to being 1976 European quarter-finalists, within an ace of reaching the semi-finals of the continent's top international competition. Many remain oblivious to the feat of manager Mike Smith's squad, and with the passing of time their achievement becomes more distant and forgotten. For a country that has achieved so little on the field of play, why is this particular group not more celebrated? Nick Burnell attempts to put that right, having researched the topic meticulously in press archives and player and coach biographies, as well as personally interviewing many of the key figures on the team and coaching staff. The book includes background on the period before qualification started in 1974, a blow-by-blow account of all the matches involved (detailed by contemporary newspaper write-ups and the authors own interviews with key figures in the campaign) and examination of the fallout from its controversial ending. It also incorporates a 'Where are they now?' angle, giving further details on the players involved. The book runs more or less chronologically, focusing primarily on the eight core qualifying games, but is also conceived as a respectful overview of the 1970s in Welsh football generally, and a somewhat irreverent look at what was happening around the sport. This is a glimpse back into a less complicated era, before the onset of 24-hour saturation coverage and millionaire journeymen players, when footballers looked to the future by doing their coaching badges or searching for local pubs that needed new landlords. It's a reminder of the players and people in and around the scene who restored pride in the Welsh football jersey and gave the football public of Wales a reason to believe. -- Y Lolfa

Foreword Author acknowledgements Introduction 1 Bowen nowhere 2 As straightforward and uncomplicated as his own name 3 The quiet revolution 4 Belt up, you baby! 5 See Budapest and Dai 6 Passport to success? 7 The team to beat 8 A day at the Racecourse 9 100 years and coasting 10 40-Second Street 11 Arsenal line up Smith 12 Ninian opinion 13 One team qualified and one team didnt Notes Bibliography -- Y Lolfa