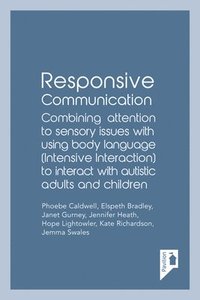 "Phoebe Caldwell has found some unique paths to achieving deep and meaningful engagement with autistic people and people with profound and multiple learning disabilities. Families and carers are in awe of the deep and intuitive connections she is able to make, adapting her way of being with and responding to each person; Through her practice of Intensive Interaction over several decades, Phoebe has illuminated the way in which sensory issues can impede communication and emotional engagement of autistic individuals with others. She has shown how both hypo- and hyper-sensitivities can contribute to a scrambled sensory input, and how subsequent anxiety results in either hyperarousal (sometimes seen as `meltdowns') or hypo-arousal (sometimes seen as `shutdowns'). These sensory issues are often unrecognised by professionals, families and other observers, as they are not routinely part of the experience of those who do not have autism. When sensory triggers are not anticipated or recognised, distress may manifest as behaviours that challenge. The authors of this book share their different perspectives, while also all being practitioners of Responsive Communication."; Professor Sheila the Baroness Hollins

Phoebe Caldwell (biologist) writes about engagement with autistic adults and children who have severe sensory process issues. Elspeth Bradley (psychiatrist) considers the neurobiological underpinnings of emotional and mental health issues, including meltdowns and shutdowns. Janet Gurney (manager of a service for people with severe and profound learning disabilities) focuses mainly on Intensive Interaction. Hope Lightowler (expert by experience) writes about the problems of being on the receiving end of service provision when your sensory difficulties go unrecognised. Kate Richardson (speech and language therapist) shares insights gained from providing a Responsive Communication service to autistic children and young people and their families. Finally, Jemma Swales (autism practitioner) focuses on her experience of working with people who are able to describe the distressing, traumatic events that arise from the clash between their autistic experience and the demands of society.