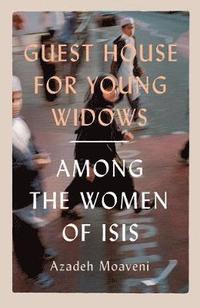 among the women of ISIS

av Azadeh Moaveni
Inbunden Engelska, 2019-10-10
189
Köp
Spara som favorit
Skickas inom 7-10 vardagar.
Fri frakt inom Sverige för privatpersoner.
Kan levereras innan jul!
Finns även som
Visa alla 3 format & utgåvor
SHORTLISTED FOR THE BAILLIE GIFFORD PRIZE FOR NON FICTION AND THE RATHBONES FOLIO PRIZE. A GUARDIAN AND OBSERVER BOOK OF THE YEAR. An intimate, deeply reported account of the women who made a shocking decision: to leave their comfortable lives behind and join the Islamic State. In early 2014, the Islamic State clinched its control of Raqqa in Syria. Baghdadi, the leader of ISIS, urged Muslims around the world to come join the caliphate. Having witnessed the brutal oppression of the Assad regime in Syria, and moved to fight for justice, thousands of men and women heeded his call. At the heart of this story is a cast of unforgettable young women who responded. Emma, from Germany; Sharmeena, from Bethnal Green, London; Nour, from Tunis: these were women - some still in school - from urban families, some with university degrees and bookshelves filled with novels by Jane Austen and Dan Brown; many with cosmopolitan dreams of travel and adventure. But instead of finding a land of justice and piety, they found themselves trapped within the most brutal terrorist regime of the twenty-first century, a world of chaos and upheaval and violence. What is the line between victim and collaborator? How do we judge these women who both suffered and inflicted intense pain? What role is there for Muslim women in the West? In what is bound to be a modern classic of narrative nonfiction, Moaveni takes us into the school hallways of London, kitchen tables in Germany, the coffee shops in Tunis, the caliphate's OB/GYN and its 'Guest House for Young Widows' - where wives of the fallen waited to be remarried - to demonstrate that the problem called terrorism is a far more complex, political, and deeply relatable one than we generally admit.
Visa hela texten

Praise for Lipstick Jihad: '[The] sense of being an outsider in two worlds may have made daily life difficult for Ms. Moaveni, but it also makes her a wonderfully acute observer, someone keenly attuned not only to the differences between American and Iranian cultures, but also to the ironies and contradictions of life today in Tehran.' * Michiko Kakutani, The New York Times * Praise for Iran Awakening: 'A moving portrait of a life lived in truth.' * The New York Times Book Review * Praise for Honeymoon in Tehran: 'Honeymoon in Tehran is a timely, well-written, and intimate exploration of the soul of Iran. With an eye for detail and a feel for her subject matter, Moaveni has brought to life a country that is at once immensely important to the West and deeply misunderstood. Honest, perceptive, and nuanced, this tale of love and anguish in the Islamic Republic is brimming with poignant political insights. This book will enchant and educate.' * Vali Nasr, author of <i>The Shia Revival: how conflicts within Islam will shape the future</i> * 'Moaveni's prose charges Guest House for Young Widows with elegance, immediacy and occasional caustic humour ... this book complicates our simplistic view of the jihadi bride by pulling back the curtain to tell a story that we almost never hear.' -- Brendan Daly * The Sunday Business Post * 'The book is a ripping yarn and has been named one of The New York Times' top 100 books of 2019. It provides a fascinating insight into the complex realities at play for those drawn to the fight.' -- Kerrie O'Brien * The Age * '[A] clear-eyed exploration.' -- Geordie Williamson * The Weekend Australian * 'An incredibly detailed piece of journalistic research ... It's genius.' -- Baillie Gifford Prize podcast 'Moaveni's book presents a survey of an unexplored landscape, tracking women's routes towards Syria ... it is written with a lightness of touch that doesn't evade the complexity of its topic.' * Sisterhood * 'This narrative nonfiction is written as a pastiche of sorts, vividly painting a picture of the journeys many Muslim women followed during their interactions with ISIS ... a cohesive and engaging story.' -- Aisling Philippa * Lip * 'Masterly ... Moaveni offers sophisticated political analysis, a poet's sensibility, a shrewd and intuitive awareness of nuance and ambiguity.' -- Kevin O'Sullivan * Irish Examiner * 'Forensic yet empathetic ... Always nuanced, Azadeh tears up the caricature of psychopaths unfazed by beheadings, and paints a more comprehensible portrait of culturally dislocated girls won over by recruiters who knew exactly which buttons to press.' -- Dani Garavelli * The Herald * 'Azadeh Moaveni has achieved a feat of reporting to provide a rare glimpse into the private lives of these ordinary people caught up in extraordinary events. Brave, visceral, moving; essential reading for anyone seeking to understand so much of the violence in our troubled world.' -- Ben Rawlence, author of City of Thorns 'Brilliantly provocative and genuinely eye-opening ... It is truly fascinating as well as being an incredibly well-written work of narrative nonfiction.' -- Alison Huber * Readings * 'Peeling back layers of gender, Islamophobia, faith, loyalty, and socialisation, Moaveni situates the women's stories within the larger historical and sociopolitical context of the time. Following 13 women in total, Guest House for Young Widows is an ambitious attempt to understand the attraction of ISIS for many disaffected youth who were ready to believe.' -- Laura Chanoux * Booklist * 'Azadeh Moaveni offers what is sure to become a modern classic, answering the question of how Muslim women become, as the Western media puts it, "radicalised" ... Moaveni not only provides granular views of particular women as they navigate this sociopolitical minefield but also situates these stories in a broader cultural context, rendering them legible in compelling ways ... I couldn't put the book dow

Azadeh Moaveni is a journalist, writer and academic, who has been covering the the Middle East for nearly two decades. She started reporting in Cairo in 1999 while on a Fulbright fellowship, and worked across the region for the next several years, covering Iran, Lebanon, Syria, Egypt, and Iraq. Her work has focused throughout on how women and girls are impacted by political instability and conflict, as well as the interplay between militarism, Islamism and women's social status and rights. A Pulitzer finalist, she is the author of Lipstick Jihad, Honeymoon in Tehran, and co-author, with Iranian Nobel Peace Laurate Shirin Ebadi, of Iran Awakening, which has been translated into over forty languages. She writes for the London Review of Books, TheGuardian, and The New York Times, among other publications. She is Director of the Project for Gender and Conflict at the International Crisis Group and Lecturer in Journalism at New York University, London.