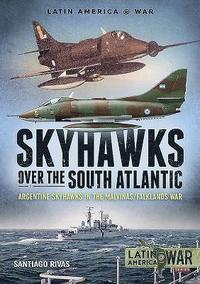 Skyhawks Over the South Atlantic

The Argentine Skyhawks in the Malvinas/Falklands War 1982

av Santiago Rivas
Häftad Engelska, 2019-12-31
289
Köp
Spara som favorit
Skickas inom 7-10 vardagar.
Gratis frakt inom Sverige över 159 kr för privatpersoner.
By 1982, the backbone of the Argentine combat aviation, both on the Air Force and the Navy, was formed by three batches of Douglas A-4 Skyhawks, with the A-4B and C of the Air Force and the A-4Qs of the Navy. Despite their age, being a model almost 30 years old at the time of the war, and lacking protection, they took on the overwhelming struggle to fight the British Task Force that opposed the Argentine forces on the Malvinas/Falkland Islands. The Skyhawks were responsible for inflicting the greatest damage upon the Royal Navy, sinking HMS Coventry, Ardent, Antelope, the RFA Sir Gallahad, and LCU F-4, while damaging many other ships and striking ground targets. They also suffered heavy losses, with 10 A-4Bs, 9 A-4Cs and three A-4Qs lost in combat, with eighteen pilots being killed. The experience of the Skyhawk during the war was another addition to the legend the model had become over the skies of Vietnam and Israel. Despite many reports to the contrary, at the time of writing the Argentine Air Force still operates modernised A-4ARs and OA-4Ars, and is one of the last two military operators of the Skyhawk in the world.
Visa hela texten

It is a very approachable book, easy to read, well written and edited. * Naval Review * ...an engrossing read. A scene-setting section provides the reader with an understanding of the political situation in the early 1980s, along with how the A-4B/C/P Skyhawk was brought into service, initially from land bases, but also on the country's only aircraft carrier, ARA Veinticinco de Mayo. * Airfix Model World * A superb publication for anyone wanting to know more about the air battles for the Falklands. * Flypast Magazine *

Santiago Rivas was born in Buenos Aires, Argentina, in 1977 and graduated in journalism. Since 1997 he has worked in aviation and defence journalism, travelling all across Latin America to research for articles and books. In 2007 he published his first book, about the Malvinas/Falklands War for a Brazilian publisher and since then, another eighteen titles have published in Argentina, Brazil, France, Germany, Austria and the United Kingdom, with others still to be released. He has also published articles in more than fifty magazines in twenty countries and currently works for more than twenty of them. He has three children and lives in Buenos Aires, travelling extensively within Latin America to fulfil his research work.