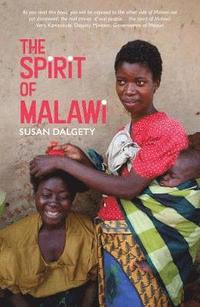 The Spirit of Malawi

av Susan Dalgety
Häftad Engelska, 2021-02-25
179
Köp
Spara som favorit
Living your life against the odds. Through the voices of Malawians The Spirit of Malawi is a first-hand account of daily life in Malawi. It also examines the big issues that affect us all, but Malawians more than most: climate change, the global economic divide and digitalisation. It looks beyond the cliches to consider what life is really like for 18 million people born into a national economy less than a quarter of the size of Edinburgh's.
Visa hela texten

'In her attempt to capture the spirit of the "warm heart of Africa," Susan Dalgety makes the wise decision to tell its story through the voices of the people who live there' - The Scotsman 'Susan Dalgety was there in May 2005. She has been a driving force for the partnership ever since. Her love for Malawi and Malawians has driven her to write this book. Susan believes in the people, and her friends in Malawi believe in her. Enjoy the pictures she draws, the stories she tells and the lessons she draws. The Warm Heart of Africa is ready to welcome you too.' - Lord Jack McConnell of Glenscorrodale First Minister of Scotland, 2001-07 As you read this book, you will be exposed to the other side of Malawi not yet discovered, the real stories of real people... the spirit of Malawi. - Vera Kamtukule, Deputy Minister, Government of Malawi

SUSAN DALGETY and her husband, an economic researcher, spent six months in Malawi from May 2019, interviewing scores of people and researching the country's history and its future prospects. During her stay, she filed a weekly 'Letter from Malawi' for The Scotsman. As the former head of communications for Lord McConnell, when he was First Minister of Scotland (2001-06), her first trip to Malawi was to set up the first official visit by the Scottish government, and help develop a bi-lateral co-operation agreement between the two countries, which remains in place today. She was previously chief writer on the Edinburgh Evening News, deputy leader of Edinburgh City Council and Director of Communication for Scottish Labour, as well as editor of the Wester Hailes Sentinel - Scotland's ground-breaking community newspaper during the 1980s and '90s This is her first book.