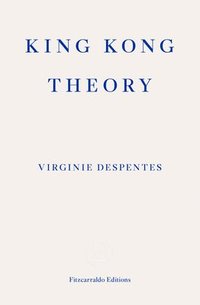 av Virginie Despentes
Häftad Engelska, 2020-08-13
140
Köp
Spara som favorit
Finns även som
Visa alla 2 format & utgåvor
'I write from the realms of the ugly, for the ugly, the frigid, the unfucked and the unfuckables, all those excluded from the great meat market of female flesh, and for all those guys who don't want to be protectors, for those who would like to be but don't know how, for those who are not ambitious, competitive, or well-endowed. Because this ideal of the seductive white woman constantly being waved under our noses - well, I'm pretty sure it doesn't exist.' Powerful, provocative and personal, King Kong Theory is a candid account of how the author of Baise-moi came to be Virginie Despentes. Drawing from personal experience, Despentes shatters received ideas about rape and prostitution, and explodes common attitudes towards sex and gender. King Kong Theory is a manifesto for a new punk feminism, reissued here in a brilliant new translation by Frank Wynne.
Visa hela texten

'I can think of almost no book I've enjoyed in recent years as much as King Kong Theory - in part for its content, in part for the ferocity of its style. In a world that continues to have difficulty contending with sex work, porn, class, and sexual violence without resorting to tired tropes, Virginie Despentes offers a fresh, necessary, inspiring path forward, just as she has been doing for decades now in a variety of media. This book is a classic, and I'm so grateful for it.' - Maggie Nelson, author of The Argonauts 'I love King Kong Theory. It's a fuck-you push-back against a blood-sucking patriarchal culture that keeps murdering and raping women till they get the idea (the survivors, ha) that they should be stupidly grateful to serve men, just lucky to even be allowed to play. This is liberatory galloping prose, inhale it now and if you've read it before read it again in this new jangling translation, ornery and alive like we need to be. This short fiery book is essential.' - Eileen Myles, author of Chelsea Girls 'In the dire age of corporatized and sanitised feminism, King Kong Theory is the radical - and darkly funny - manifesto we need.' - Amelia Abraham, author of Queer Intentions 'Despentes is often described as a "rock-and-roll" Balzac ... She also resembles, by turns, William Gibson, George Eliot and Michel Houellebecq, with a sunnier attitude.' - Chris Kraus, author of I Love Dick 'Part-memoir, part-critical treatise on masculinity and power, with reference to rape, pornography, and prostitution, King Kong Theory is the kind of book you want to place in the hands of everyone you know. It is arresting from the very first lines; there's something aggressively incantatory about it, a kind of battle-rap braggadocio.' - Lauren Elkin, Harper's

Virginie Despentes is a writer and filmmaker. She is the author of fifteen books including Apocalypse Baby (2010) and the Vernon Subutex trilogy (2013-2017). She was shortlisted for the Man Booker International Prize for Vernon Subutex 1 in 2018.