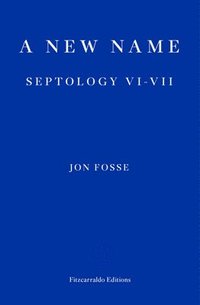 av Jon Fosse
Häftad Engelska, 2021-09-08
157
Köp
Spara som favorit
Kan levereras innan julafton!
Asle is an ageing painter and widower who lives alone on the southwest coast of Norway. In nearby Bjorgvin another Asle, also a painter, is lying in the hospital, consumed by alcoholism. Asle and Asle are doppelgangers - two versions of the same person, two versions of the same life, both grappling with existential questions. In this final instalment of Jon Fosse's Septology, the major prose work by 'the Beckett of the twenty-first century' (Le Monde), we follow the lives of the two Asles as younger adults in flashbacks: the narrator meets his lifelong love, Ales; joins the Catholic Church; and makes a living bytrying to paint away all the pictures stuck in his mind. A New Name: Septology VI-VII is a transcendent explorationof the human condition, and a radically other reading experience - incantatory, hypnotic, and utterly unique.
Visa hela texten

'Fosse's portrait of memory remarkably refuses. It will not be other than: indellible as paint, trivial as nail clippings, wound like damp string. This book reaches out of its frame like a hand.' -Jesse Ball, author of Census 'Jon Fosse is a major European writer.' -Karl Ove Knausgaard, author of My Struggle 'Fosse intuitively - and with great artistry - conveys ... a sense of wonder at the unfathomable miracle of life, even in its bleakest and loneliest moments. In this fine conclusion to Septology, the religious subtexts of the project's companion pieces at last draw into focus. The link between Asle's art and his faith finds subtle expression in the parallels between the haunting oil painting of two crossed lines, which the narrator contemplates at the beginning of each section, and the cross made with anointing oil as he is accepted into the Catholic faith.... As the final pages draw to their profound and breath-snatching close, Septology also attains that original ambition: it imbues the very enigma of life, which can seem at times so terrifyingly dark, with a light that is almost beatific.' - Bryan Karetnyk, Financial Times 'The entire septet seems to take place in a state of limbo...Though Fosse has largely done away with punctuation altogether, opting instead for sudden line breaks, his dense, sinuous prose is never convoluted, and its effect is mesmerizing.' - Johanna Elster Hanson, TLS

Jon Fosse was born in 1959 on the west coast of Norway and is the recipient of countless prestigious prizes, both in his native Norway and abroad. Since his 1983 fiction debut, Raudt, svart [Red, Black], Fosse has written prose, poetry, essays, short stories, children's books, and over forty plays, with more than a thousand productions performed and translations into fifty languages. A New Name is the final volume in Septology, his latest prose work, published in three volumes by Fitzcarraldo Editions.