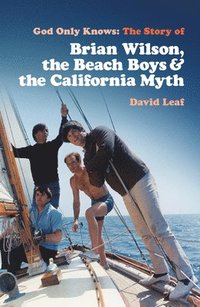 The Story of Brian Wilson, the Beach Boys and the California Myth

av David Leaf
Häftad Engelska, 2022-06-30
223
Köp
Spara som favorit
Originally published in 1978 as The Beach Boys and the California Myth, this groundbreaking study was both the first full-length book on the band and the first to recognize Brian Wilson as one of the most significant and influential artists of the 20th century. Covering the turbulent family strife and internal conflicts as well as giving proper attention to the remarkable music, the book was an instant classic. An intimate look at Brian's rollercoaster of a life and career, it's told through the eyes of those who were there during Wilson's most legendary productions including Pet Sounds and Good Vibrations. Revised and updated, God Only Knows covers the decades since the 1985 edition, including Brian's first acclaimed solo album, his startling return to live performing, the landmark Pet Sounds tour, the "All-Star Tribute to Brian Wilson" (which Leaf wrote and produced) and the triumphant and miraculous Brian Wilson Presents SMiLE world premiere in London. Filled with surprising revelations, insight and behind-the-scenes detail, this indispensable book written by renowned Brian Wilson expert David Leaf also features forewords by Jimmy Webb, the Bee Gees' Barry Gibb and Melinda Wilson, Brian's wife.
Visa hela texten

'David Leaf's matchless The Beach Boys and the California Myth overshadows any book that documents the group's most successful years.' The Guardian "When I championed the first edition of this book in 1978 in Melody Maker, I wrote 'The definitive story. Probably the best book ever of any aspect of music history. A one of a kind effort, a new genre of journalism by going behind the scenes without sensationalizing.' In our world, the sequel is almost never better than the original. But in the rock biography universe, David Leaf's God Only Knows: The Story of Brian Wilson, the Beach Boys and the California Myth is akin to The Godfather Part II. In this massive update, Leaf reveals deeper truths about Mr. Wilson that make his adventures with Brian feel like a page-turning novel." Author and music historian, Harvey Kubernik 'Essential reading for anybody who cares about Brian Wilson and the Beach Boys and the evolution of rock & roll.' Jason Fine, former Editor-in-Chief, Rolling Stone

David Leaf is an award-winning writer, director and producer, whose feature credits include the Venice Film festival favorite The U.S. vs. John Lennon, the Grammy-nominated Beautiful Dreamer: Brian Wilson and the Story of SMiLE, The Night James Brown Saved Boston, and Who Is Harry Nilsson (And Why Is 'Everybody Talkin' About Him?). As well as publishing the seminal The Beach Boys and the California Myth in 1978, David wrote the Bee Gees' authorized autobiography. Leaf is also a professor at the UCLA Herb Alpert School of Music in Los Angeles, where, since 2010, he has been teaching courses in rock documentary, songwriting and the Beatles.