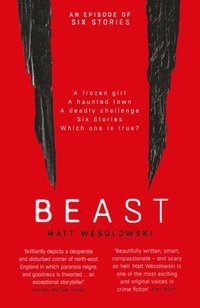 av Matt Wesolowski
E-bok (EPUB - DRM), Engelska, 2019-12-06
65
Ladda ned
Spara som favorit
Laddas ned direkt
Läs i vår app för iPhone, iPad och Android
Finns även som
Visa alla 1 format & utgåvor
Elusive online journalist Scott King examines the chilling case of a young vlogger found frozen to death in the legendary local 'vampire tower', in another explosive episode of Six Stories...'Matt Wesolowski brilliantly depicts a desperate and disturbed corner of north-east England in which paranoia reigns and goodness is thwarted. It's a big ask to come up with a new vampire tale, but Wesolowski achieves it magnificently. He is an exceptional storyteller' Andrew Michael Hurley'Disturbing, compelling and atmospheric, it will terrify and enthral you in equal measure' M W Craven'Beautufully written, smart, compassionate - and scary as hell. Matt Wesolowski is one of the most exciting and original voices in crime fiction' Alex North________________In the wake of the 'Beast from the East' cold snap that ravaged the UK in 2018, a grisly discovery was made in a ruin on the Northumbrian coast. Twenty-four-year-old Vlogger, Elizabeth Barton, had been barricaded inside what locals refer to as 'The Vampire Tower', where she was later found frozen to death.Three young men, part of an alleged 'cult', were convicted of this terrible crime, which they described as a 'prank gone wrong'. However, in the small town of Ergarth, questions have been raised about the nature of Elizabeth Barton's death and whether the three convicted youths were even responsible.Elusive online journalist Scott King speaks to six witnesses - people who knew both the victim and the three killers - to peer beneath the surface of the case. He uncovers whispers of a shocking online craze that held the young of Ergarth in its thrall and drove them to escalate a series of pranks in the name of internet fame. He hears of an abattoir on the edge of town, which held more than simple slaughter behind its walls, the tragic and chilling legend of the 'Ergarth Vampire... Both a compulsive, taut and terrifying thriller, and a bleak and distressing look at modern society's desperation for attention, Beast will unveil a darkness from which you may never return...________________'Endlessly inventive and with literary thrills a-plenty, Matt Wesolowski is boldly carving his own uniquely dark niche in fiction' Benjamin Myers'A gripping and incredibly powerful novel of our times - the Six Stories series just keeps getting better and better' Kevin Wignall'Creepy, exciting and very well written' Yrsa Sigurardottir'Such a fantastic, creepy read!' Elodie Harper'Absolute genius' Louise Beech'Edgy and dark' From Belgium with Book Love'Wesolowski is on addictive, chilling and macabre form' Tattooed Book Geek'Visually stunning and chillingly complex. Five stars are not enough' The Book Trail'The epitome of a page-turner' The Book Review Cafe'Excellently chilling, fantastically dark' The Reading Closet'A spectacular read' Emma's Bookish Corner
Visa hela texten