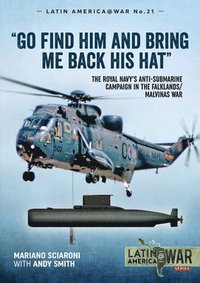 'Go Find Him and Bring Me Back His Hat'

The Royal Navy's Anti-Submarine Campaign in the Falklands/Malvinas War

av Mariano Sciaroni, Andy Smith
Häftad Engelska, 2020-11-15
218
Bevaka
Spara som favorit
Tillfälligt slut – klicka "Bevaka" för att få ett mejl så fort boken går att köpa igen.
When the Task Force of the Royal Navy started its southbound voyage, as the second major act during the Falklands/Malvinas War of 1982, its commanders assessed the Argentine submarines as the biggest threat. Even if limited in total size and scope, this threat was so conditioning that the conclusion was that it had to be neutralised at the earliest possible moment in time, otherwise no victory would have been possible. The British believed that the Argentines would wait for them in the waters of the war zone with two modern and dangerous German-made Type-209 submarines, and a modified US-made submarine from the times of the Second World War. To their good luck, this threat was quickly reduced to two, because during the first naval combat of the conflict, the old ARA Santa Fe was knocked out and captured by the Royal Navy at South Georgia. Further anti-submarine operations followed on 1 May 1982, when ARA San Luis attacked Royal Navy warships, and, in turn, was counterattacked, resulting in scenes reminiscent of those from the movie Das Boot. Avoiding its pursuers, the boat distanced before re-attacking, a few days later - when multiple factors conspired to prevent it from becoming successful. Despite systematic pursuit by warships and helicopters of the Royal Navy, the submarine eventually returned to its home port in one piece. Because the other Argentinean Type-209, ARA Salta, was non-operational, the withdrawal of the ARA San Luis also prompted the withdrawal of all the major units of the Argentine Navy into shallow waters off the coast of South America. Although the undersea battlefield was thus actually empty of Argentine submarines, elements of the Royal Navy's task force continued detecting and tracking multiple sonar contacts over the following days and weeks. Indeed, they ultimately fired no fewer than 31 torpedoes, 49 depth-charges and 21 mortar salvoes at these. POSSUB! Or Bring me back his Hat! is the story of the crews of 22 warships, submarines, anti-submarine-warfare helicopters, and Nimrod submarine-hunter aircraft, their intensive and advanced training, and combat experiences - a richly illustrated story that has never been told before.
Visa hela texten

Mariano Sciaroni graduated as a lawyer, has a Master's Degree in Strategy and Geopolitics, and a postgraduate course in contemporary military history from the Argentine Army's Military Academy. He is currently working as a specialist in insurance and commercial law and lectures in procedural law at the Law Faculty of the Universidad Catolica Argentina. Living with wife and three children in Buenos Aires, he is a member of the Argentine Institute of Military History and a Sub-Lieutenant in the Argentine Army Reserve. He has published two books and dozens of articles on the military history of Argentina, published in Argentina, United States, Germany, and Russia. This is his second instalment for Helion's @War series. Andy Smith is from the United Kingdom, and has spent the last ten years in intensive research about naval operations during the Falklands War. Amongst others, he has helped multiple Argentine historians of this conflict, organised a highly successful reunion of veterans from both sides, and also put in touch individual veterans with their former enemy. After working and studying in Spain, and graduating in Business and Spanish at a university in the UK, he entered a career in marketing, and is currently living in Budapest in Hungary, teaching English. He is working on multiple projects about the Falklands War, and this is his first instalment for Helion's @War series.