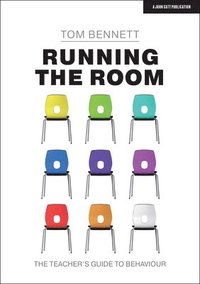 Running the Room: The Teacher's Guide to Behaviour

av Tom Bennett
(1 röst)  |  Läs 1 recension
Häftad Engelska, 2020-08-28
233
Köp
Spara som favorit
Kan levereras innan julafton!
Good behaviour is the beginning of great learning. All children deserve classrooms that are calm, safe spaces where everyone is treated with dignity. Creating that space is one of the most important things a teacher needs to be able to do. But all too often teachers begin their careers with the bare minimum of training - or worse, none. How students behave, socially and academically, dictates whether or not they will succeed or struggle in school. Every child comes to the classroom with different skills, habits, values and expectations of what to do. There's no point just telling a child to behave; behaviour must be taught. Behaviour is a curriculum. This simple truth is the beginning of creating a classroom culture where everyone flourishes, pupils and staff. Running the Room is the teacher's guide to behaviour. Practical, evidence informed, and based on the expertise of great teachers from around the world, it addresses the things teachers really need to know to build the classrooms children need. Bursting with strategies, tips and solid advice, it brings together the best of what we know and saves teachers, new or old, from reinventing the wheels of the classroom. It's the book teachers have been waiting for.
Visa hela texten

Tom Bennett is the founder of researchED, a grass-roots organisation that raises research literacy in education and campaigns for better evidence awareness worldwide. In 2015 he became the UK government's school 'Behaviour Czar', advising on behaviour policy, as well as chairing the Mental Health in Schools panel. He has written four books about teacher training, and in 2015 he was longlisted as one of the world's top teachers in the GEMS Global Teacher Prize. In the same year he made The Huffington Post's 'Top Ten Global Bloggers' list. He is also the Director of Tom Bennett Training, which works exclusively with the most disadvantaged students and schools in England, helping them to turn around. His online resources have been viewed over 1,200,000 times, and he is a TeacherFellow of Corpus Christi College, University of Cambridge.