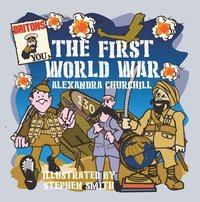 av Alexandra Churchill
Häftad Engelska, 2022-01-03
299
Köp
Spara som favorit
In this large volume, historian Alex Churchill and illustrator Steve Smith have gone out to produce the First World War book they wish they had had as kids. Treating the conflict as a truly global one, get ready to go way beyond the Western Front with them, through 400 pages of text, artwork and hundreds of photographs in search of an all round understanding of the conflict.
Visa hela texten

Alexandra Churchill is an author, researcher and historian who has contributed to and appeared on numerous television documentaries, including Timewatch (BBC2), Fighting the Red Baron (Channel 4) and Titanic with Len Goodman (BBC1) and Channel 4's Secret Histories. She is a co-founder of The Great War Group, established as a non-profit, Foundation CIO to promote education on, and commemoration of the First World War. The approach of the group is wide-ranging, considering all fronts, and all nations involved in the conflict.