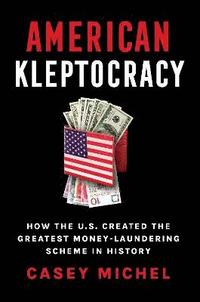 how the U.S. created the greatest money-laundering scheme in history

av Casey Michel
(1 röst)
Inbunden Engelska, 2021-11-18
229
Köp
Spara som favorit
Finns även som
Visa alla 1 format & utgåvor
An explosive investigation into how the United States of America built one of the largest illicit offshore finance systems in the world. For years, one country has acted as the greatest offshore haven in the world, attracting hundreds of billions of dollars in illicit finance tied directly to corrupt regimes, extremist networks, and the worst the world has to offer. But it hasn't been the sand-splattered Caribbean islands, or even traditional financial secrecy havens like Switzerland or Panama that have come to dominate the offshoring world. Instead, the country profiting the most also happens to be the one that still claims to be the moral leader of the free world, and the one that claims to be leading the fight against the crooked and the corrupt: the United States of America. American Kleptocracy examines just how the United States' implosion into a centre of global offshoring took place: how states such as Delaware and Nevada perfected the art of the anonymous shell company; how post-9/11 reformers watched their success usher in a new flood of illicit finance directly into the U.S.; how African despots and post-Soviet oligarchs came to dominate American coastlines, American industries, and entire cities and small towns across the American Midwest; how Nazi-era lobbyists birthed an entire industry of spin-men whitewashing transnational crooks and despots, and how dirty money has now begun infiltrating America's universities, think tanks, and cultural centres; and how those on the frontline are trying to restore America's legacy of anti-corruption leadership and finally end this reign of American kleptocracy. It also looks at how Trump's presidency accelerated all of the trends already on hand and how the Biden administration can, and should, act on this tawdry inheritance.
Visa hela texten

'Casey Michel cuts through the spin, to reveal the inner workings of the American economy. His writing has shown again and again the subterfuges and secrecy at the heart of how money moves through the financial system, and does it with panache, wit, and a blessed aversion to jargon. I always read his work, and can't wait to read this one.' -- Oliver Bullough, author of the international bestseller <i>Moneyland: the inside story of the crooks and kleptocrats who rule the world</i> 'Casey is the foremost journalistic voice in the fight against kleptocracy. No other individual is so consistently on the case and interested in both the actors and the possible policy responses. His knowledge of the existential danger posed by kleptocracy is bar none, and we rely on his work like no one else to inform policy.' -- Paul Massaro, Congressional Policy Advisor to US Helsinki Commission 'Michel masterfully recounts the tragicomic outcomes when outre autocrats meet serviceable financial and legal systems.' -- Martin Sandbu * Financial Times * 'Remarkable and perspicacious ... an important and eye-opening book.' -- Bradley Hope, <i>New York Times</i> bestselling co-author of <i>Billion Dollar Whale</i> 'Remarkable and well-researched ... Casey Michel shows how the U.S. has taken the top spot at the ease of doing illicit business legally.' -- Katharina Pistor, author of <i>Code of Capital</i> 'An indefatigable young American journalist who has virtually cornered the international kleptocracy beat on the U.S. end of the black aquifer.' * The Los Angeles Review of Books * 'Mr Michel builds his book around two characters, both prolific users of America's financial-secrecy infrastructure, deftly weaving together their stories and his analysis.' * The Economist * 'Clearly-written, compelling, and fast-paced ... a clarion call for citizens and those at all levels of government who have not yet realised that we need to clean up our own act to protect ourselves from predatory adversaries.' -- Fiona Hill, senior fellow at the Brookings Institution 'Casey Michel brings home the extent to which the United States has fuelled money laundering, corruption, and other crimes plaguing the world. His passionate writing comes from his outrage at what has gone on in our own backyard and his understanding of what is at stake, namely trillions of dollars hidden from our national treasury with help from U.S. banks. Readers will learn why it is critical for Americans to look inward and do more to stop the abuses here at home that are helping to power illicit finance around the world.' -- Senator Carl Levin 'Rule-of-law democracies are engaged in a clash of civilisations against international criminals, kleptocrats, and corrupt politicians. Michel exposes the troubling role the U.S. has played in facilitating the dark economy and underscores the urgent need for transparency, reform, and accountability.' -- Senator Sheldon Whitehouse 'If the right person writes the right book, and enough of the right people read it, incredible changes can take place. Casey Michel has written such a book. In the right hands, it could spur policy shifts in the U.S. that would have global ramifications.' -- Jasmin Mujanovic, author of <i>Hunger and Fury </i> 'Compelling and colourful ... Casey Michel is one of the United States' brightest emerging foreign policy thinkers - a scholar, journalist, and policy expert who has spent years chronicling the rise of globalised corruption in meticulous detail. In American Kleptocracy, he provides the definitive account of the defining threat of our era - weaving together an irresistible narrative with a bold but pragmatic agenda for reform that can end America's complicity in foreign corruption.' -- Nate Sibley head of Hudson Institute's Kleptocracy Initiative 'American Kleptocracy is essential reading to understand how the U.S. has become the global destination for dirty money. Michel exp

Casey Michel is a journalist whose writings on offshoring, kleptocracy, and financial secrecy have appeared in Foreign Affairs, The Atlantic, The Washington Post, Vox, The New Republic, and POLITICO Magazine, among others. He is an Adjunct Fellow with the Hudson Institute's Kleptocracy Initiative, and has contributed research pertaining to offshoring, illicit finance, and foreign interference to the German Marshall Fund, the Human Rights Foundation, and others.