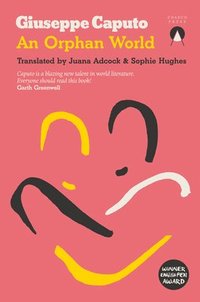 av Giuseppe Caputo
Häftad Engelska, 2019-10-22
119
Köp
Spara som favorit
Skickas inom 7-10 vardagar.
Fri frakt inom Sverige över 159 kr för privatpersoner.
Finns även som
Visa alla 1 format & utgåvor
In a poverty-stricken neighbourhood wedged between the city and the sea, a father and son struggle to keep their heads above water. Rather than being discouraged by their difficulties and hardship, their response is to come up with increasingly bizarre and imaginative plans in order to get by. Even when a horrifying, macabre event rocks the neighborhood and the locals start to flee, father and son decide to stay put. What matters is staying together. This is a bold, poignant text that juxtaposes a very tender father-son relationship with the son's sexual liberation and a brutal depiction of homophobic violence. Giuseppe Caputo uses delicate - yet electrifying - lyricism and imagery to weave a tale that balances desire, violence, discrimination, love, eroticism and defiance, while evoking with surreal humor the social marginalization of the protagonists as they struggle to keep afloat in a society where there are no safety nets. Like a brightly-lit theme park with its house of horrors, reminiscent in parts of James Baldwin's Another Country or Virginie Despentes' Vernon Subutex trilogy, An Orphan World defies the reader to look away, and the reward is an exhilarating carnival ride filled with beauty, compassion and loss.
Visa hela texten

"Caputo is a blazing new talent in world literature. Everyone should read this book!" --Garth Greenwell "Gritty...an effortlessly multi-layered plot that challenges the reader to question everything" --The Skinny "One of the best debut novels I've read this year and it marks Caputo out as one of the most striking new voices coming from Latin America." --Morning Star "Caputo writes with his pen on fire." --Books and Bao "He's a talent." --Niven Govinden, author of This Brutal House Winner English PEN Translates award

Giuseppe Caputo was born in Barranquilla, Colombia, in 1982. He studied creative writing at New York University, and at the University of Iowa. Also at Iowa, he specialised in gender studies. After being Cultural Director of the Bogota International Book Festival for many years, Caputo now teaches creative writing at the Instituto Caro Cuervo in Bogota. An Orphan World is his first novel and it has earned Caputo a place in the 2017 Hay Festival's Bogota 39 list of best Latin American writers under 40. Juana Adcock is a Mexican British poet and translator. She works from Spanish into English and viceversa, and has translated authors such as Gabriela Wiener, Hubert Matiuwaa, Julieta Valero, Andrew Motion, Helen Mort and Alexander Hutchison. In 2016 she was named one of the Ten New Voices from Europe by Literary Europe Live for her own work as a poet. She is also known for her multilingual sound and music collaborations. Sophie Hughes has translated some of the finest Spanish and Latin American authors at work today, including Enrique Vila-Matas, Rodrigo Hasbun and Laia Jufresa. In 2019 she was shortlisted for the Man Booker International Prize for her translation of Alia Trabucco Zeran's The Remainder and in 2018 she was named one of the Arts Foundation 25th anniversary fellows for her contribution to the field of literary translation.