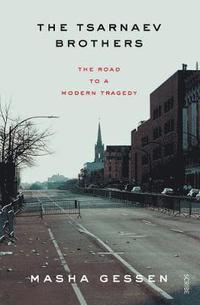 the road to a modern tragedy

av Masha Gessen
Häftad Engelska, 2015-06-04
179
Köp
Spara som favorit
Specialorder (osäker tillgång). Skickas inom 11-20 vardagar.
Fri frakt inom Sverige för privatpersoner.
Kan tyvärr inte längre levereras innan jul.
A riveting search for the roots of terrorism by the bestselling author of The Man Without a Face. The facts of the tragedy are established: on 15 April 2013, two homemade bombs exploded near the finish line of the Boston Marathon, killing three people and wounding 264 others. The elder of the brothers implicated in the attack, Tamerlan Tsarnaev, died in the ensuing manhunt; Dzhokhar's trial got underway in early 2015. What we don't know is why. How did such a nightmare come to pass? Award-winning Russian journalist Masha Gessen draws on her unique insight and credentials to deliver a powerful story of dislocation, and the longing for clarity and identity that can reach the point of combustion. She reconstructs the struggle between assimilation and alienation that fuelled the Tsarnaev brothers' apparent metamorphosis into a new breed of homegrown terrorist, with their feet planted on American soil but their loyalties elsewhere - a split identity that seems to have incubated a deadly sense of mission.
Visa hela texten

'[F]ascinating and illuminating' NYMag 'Masha Gessen does something unexpected ... In a book about Tamerlan and Dzhokhar Tsarnaev and their role in the 2013 Boston Marathon bombing, she barely describes the crime ... Still, if such an approach seems counterintuitive, that's the power of this remarkable book' -- David Ulin Los Angeles Times '[Masha Gessen's] knowledge of Soviet and Russian history, and her reporting on the ground in Dagestan, Kyrgyzstan and Chechnya, lend a resonance and weight to the sections of this book devoted to the Tsarnaev family's peregrinations in that region before deciding to immigrate to the United States ... The portrait of the Tsarnaevs that emerges from this book, like many accounts, is that of a restless, fractious family that would find its immigrant dreams dissolving, after a decade, into disappointment and dysfunction; a family whose personal woes and confusions seem to have played as large a role, or even a larger one, in paving the brothers' road to violence than any sort of coherent, informed ideology or religious commitment.' -- Michiko Kakutani New York Times 'A balanced account of an event as shattering as the Boston Marathon bombing will by its nature be controversial ... Gessen has done valuable work ... She is to be commended for humanizing rather than demonizing the brothers ... [The Tsarnaev Brothers] offers another point of view.' Newsday 'The fearless Russian-American journalist brings equal parts sympathy and skepticism to the task of tracking the Tsarnaev family ... You don't have to believe all of Gessen's conclusions to find the journey both fascinating and illuminating on the hardships of life on the cultural margins.' Vulture 'Engrossing ... one of the best books I've ever read about terrorism and the immigrant experience in America ... [Gessen] is a student of state and stateless terror, and is excellent on the varieties of fear it engenders.' Newsweek 'Gessen finds no single point in the brothers' lives at which they were radicalized. Instead, she presents twists and turns that offer vantage points where we can pause and ask, What if?' -- Janet Napolitano New York Times Book Review 'Meticulous ... Gessen traces the [Tsarnaev] family's experience as ethnic Chechen refugees and immigrants to before the now infamous brothers were even born to better understand all of the factors that led to the Boston bombing.' -- Cullen Murphy Vanity Fair 'The gut-wrenching clarity of Gessen's account is a gift. Her prose is spare and highly polished, evoking the melancholy of the Tsarnaevs's homeland ... This is not aloof, dispassionate journalism. Gessen's voice runs through it, quietly assured in its judgments ... If the brothers remain an enigma, what is illuminated is their world - Gessen demonstrates the fragmentation within communities when fear and suspicion take root, and she shows how tactics used to fight terrorism risk degrading the ideals we aim to protect, sowing bitter disillusionment in people whose American dreams turn into nightmares ... It's impossible not to read on. [Gessen's] tenacious reporting commands our attention and makes The Brothers essential to understanding how the heartbreak here in Boston fits into the endless heartache of this world.' -- Jenna Russell Boston Globe 'Extraordinary ... Both a gripping narrative and a stunning piece of investigative journalism ... Gessen gives us the human side to the story of two young men who must be understood as more than monsters, and she persuasively argues that we deserve more answers than we've gotten.' -- Randy Dotinga Christian Science Monitor 'Meticulously documented and detailed ... [Gessen] crafts a dark tapestry, woven of war and loss in Chechnya, Dagestan and the Tsarnaev's own brutal history.' Providence Journal 'Gessen rejects the usual narrative of religious "radicalisation" ... her argument is that no single route led Tamerlan and Dzhokhar to their abominable deeds ... the Boston bombings resulted

Masha Gessen is an acclaimed Russian-American journalist and the author of several books, including bestsellersThe Man Without a Face and Words Will Break Cement. Her work has appeared in The New York Times, Slate, Vanity Fair, and many other publications, and has received numerous awards. A longtime resident of Moscow, she now lives in New York.