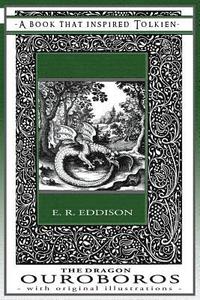 The Dragon Ouroboros - A Book That Inspired Tolkien

This epic tale was first published in 1922 under the title ?The Worm Ouroboros?. Professor J.R.R. Tolkien, who was aged thirty at the time, praised it in print, writing in a letter that he enjoyed Eddison?s books ?for their sheer literary merit?. No doubt their influence remained with him as he wrote The Lord of the Rings and The Hobbit.  Eddison, Tolkien stated, was ?the greatest and most convincing writer of ?invented worlds?? he had ever read.

Tolkien?s close friend and confidante, author C.S. Lewis was also an admirer, opining that ?no writer can be said to remind us of Eddison?. Dart-Thornton?s new introduction explains the origin of the Ouroboros symbol and discusses Tolkien?s critical reaction to Eddison?s work. This heroic high fantasy novel is often compared with Tolkien's ?The Lord of the Rings?, which was written many years later. ?The Lord of the Rings?, however, is written mostly in modern English, while Eddison wrote the greater part of Ouroboros in sixteenth-century English. Ryan Harvey, in ?Where Head and Tail Meet: E. R. Eddison?s The Worm Ouroboros? explains that Eddison employed his experience translating Norse sagas and reading medieval and Renaissance poetry, which was, at that time, an almost unique approach among popular fantasy novels. Readers will swiftly become accustomed to Eddison?s archaic language and find themselves swept away by the imagery, which is frequently beautiful, for example:. ?The outer ward of the fortress was dark with cypress trees: black flames burning changelessly to heaven from a billowy sea of gloom,? and ?Enchanted boats, that seemed builded of the glow-worm?s light, drifted on the starry bosom of the lake. Over the sloping woods the limbs of the mountains lowered, unmeasured, vast, mysterious in the moon?s glamour?? This edition is ornamented with the original pictures printed in the 1922 edition - ten classic illustrations by artist Keith Henderson. It is easy to see why Tolkien was impressed with Eddison?s unusual, sprawling and imaginative work, which undoubtedly influenced his creation of ?The Hobbit? and ?The Lord of the Rings?.
Visa hela texten

i enjoyed the book and was anxious to continue after intervals away. the style wasn't off- putting to me, any more than dicken's period speech is. also, liked the professor's bookshelf edition.

Eric Rcker Eddison, CB, CMG (24 November 1882 - 18 August 1945) was an English civil servant and author, writing under the name "E.R. Eddison." Eddison is best known for the early romance The Worm Ouroboros (1922) and for three volumes set in the imaginary world Zimiamvia, known as the Zimiamvian Trilogy: Mistress of Mistresses (1935), A Fish Dinner in Memison (1941), and The Mezentian Gate (1958). These early works of high fantasy drew strong praise from J. R. R. Tolkien, C. S. Lewis, and later, Ursula K. Le Guin. Tolkien generally approved Eddison's literary style, but found the underlying philosophy rebarbative; while Eddison in turn thought Tolkien's views "soft". Other admirers of Eddison's work included James Stephens, who wrote the introduction to the 1922 edition; Robert Silverberg, who described The Worm Ouroboros as "the greatest high fantasy of them all"; and Clive Barker.

II.    The Wrastling for Demonland

IV.    Conjuring in the Iron Tower

VI.    The Claws of Witchland

VII.    Guests of the King in Carcë

VIII.    The First Expedition to Impland

X.    The Marchlands of the Moruna

XI.    The Burg of Eshgrar Ogo

XVII.    The King Flies His Haggard

XXI.    The Parley Before Krothering

XXIV.    A King in Krothering

XXVI.    The Battle of Krothering Side

XXVII.    The Second Expedition to Impland

XXIX.    The Fleet at Muelva

XXXI.    The Demons Before Carcë

XXXII.    The Latter End of All the Lords of Witchland

BIBLIOGRAPHICAL NOTES ON THE VERSES