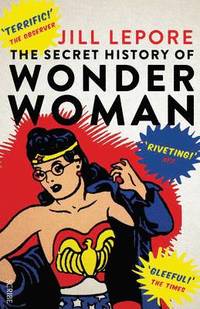 The Secret History of Wonder Woman

av Jill Lepore
Häftad Engelska, 2015-08-13
149
Köp
Spara som favorit
Skickas inom 5-8 vardagar.
Fri frakt inom Sverige över 159 kr för privatpersoner.
Finns även som
Visa alla 2 format & utgåvor
Like every other superhero, Wonder Woman has a secret identity. Unlike every other superhero, she also has a secret history. Drawing from an astonishing trove of documents, including never-before-seen private papers, Harvard historian and New Yorker staff writer Jill Lepore reveals the fascinating family story that sparked the invention of the most popular female superhero of all time. Delving into the life of Wonder Woman's eccentric creator, psychologist William Moulton Marston, Lepore uncovers her feminist origins: from the warrior princesses of the Amazon, to suffragists including Emmeline Pankhurst, and the women Marston shared his life with - his wife and his mistress. The Secret History of Wonder Woman is at once a riveting work of pop-culture history, and a crucial insight into the struggle for women's rights in the twentieth century and the troubled place of feminism today.
Visa hela texten

'All superheroes have strange myths of origin, but the politically and erotically charged back-story of Wonder Woman outstrips any comic book. Jill Lepore unmasks the comic-strip heroine as the strange daughter of early 20th-century women's suffrage and the bondage-fixated imagination of William Moulton Marston, a hucksterish psychologist who invented the lie-detector test and lived in a covert threesome with his wife and girlfriend ... A startling and intelligent double biography.' -- James McConnachie Sunday Times 'The book I read most eagerly and discussed most avidly in 2014 was The Secret History of Wonder Woman ... Lepore is among the most productive, intellectually invigorating and surprising cultural critics in the US' -- Elaine Showalter Times Literary Supplement 'Books of 2014' 'In pursuit of Wonder Woman, Jill Lepore has tackled archives, interviewed contemporaries and dug through court transcripts, college records, the literature of the early 20th-century suffragism and the annals of Wonder Woman and her rivals. The result is a tour de force.' -- Helen DeWitt Literary Review 'Jill Lepore's obsessively researched book on Wonder Woman, the four-color embodiment of the women's rights movement, reveals that the life of the character's creator, Dr. William Marston - inventor of the lie detector, charming crank, ardent feminist and secret polygamist - was waaay more colorful than any comic book superhero. Suffering Sappho!' -- Art Spiegelman, author of Maus 'Hugely entertaining ... Lepore teases out [connections] between Wonder Woman, the early-20th-century women's movement, and Marston's fascinating life and odd psyche, in which the liberation of women somehow got all mixed up with bondage and spanking.' The Atlantic 'An absolutely unputdownable book. The life history of polymath charlatan and/or genius (I couldn't ever decide) William Moulton Marston, who worked his way through law, movie scenarios, lie detection, menages a trois, free love, BDSM and polygamy before creating the first feminist super-person had me saying "wow" practically every other page. And that's not even mentioning the tough-as-nails women he exalted, lifted from and, uh, shared who make up the molten core of this newly-revealed story. Rocketing from the suffragism of the 1910s to the ERA of the 1970s on a wave of home-spun pop culture righteousness, this story's head-spinning weirdness ultimately makes you question your own accomplishments, aims, and - almost like a great modern novel - your real motives.' -- Chris Ware, author of Building Stories and Jimmy Corrigan 'All credit to Jill Lepore for simultaneously rescuing Wonder Woman from indifference, establishing her as an expression of first-wave feminism and introducing her creator, who must be one of the more repellent individuals ever to call himself a feminist ... Terrific reading.' -- Catherine Bennett The Observer 'I love writers (and, indeed superheroines) who balance muscularity with intellect, surface charisma with depth, passion with politics. Lepore's achievements are even more likely to pass into greatness and myth than Wonder Woman's, so when the two of them meet, as they do here in the pages of a book, it's a thrilling adventure.' -- Bidisha 'Seamlessly combining rigorous scholarship and riveting readability, this richly rewarding book illuminates the histories of a problematic comics icon. A must-read.' -- Alex Summersby SFX Magazine 'More than a treat for comic fans, Lepore's superb book is for anyone interested in the social history of America.' -- Martin Gray Scotland on Sunday 'What Lepore does so well is to show how Wonder Woman's career mirrored the hopes, progress, and eventual disappointments of the American women's movement in the 20th century ... There's a new Wonder Woman movie coming in 2017. If Lepore's "secret history" has proved one thing, it's that at least so far each era has gotten the Wonder Woman it deserves.' -- Buzzy Jackson The Boston Glo

Jill Lepore is a professor of American history at Harvard University and a staff writer at The New Yorker. Her books include Book of Ages, a finalist for the National Book Award; New York Burning, a finalist for the Pulitzer Prize; The Name of War, winner of the Bancroft Prize; and The Mansion of Happiness, which was short-listed for the 2013 Andrew Carnegie Medal for Excellence in Nonfiction. She lives in Cambridge, Massachusetts.