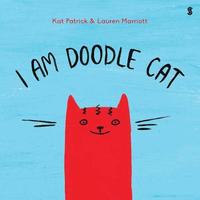 I Am Doodle Cat

av Kat Patrick
Inbunden Engelska, 2016-04-14
3-6 år
129
Köp
Spara som favorit
I Am Doodle Cat is a cheerful children's book here to encourage imagination, celebration of the things you love, and finding the magic in silliness. Written by Kat Patrick, with delightful illustrations by Lauren Marriott, this book shows a tomato-red Doodle Cat rejoicing in everyday pleasures such as swimming in the ocean, wearing a favourite onesie, and playing guitar. Whatever your age, I Am Doodle Cat reminds you of the universe's splendidness, and above all, to remember to love YOU!
Visa hela texten

'This uplifting read is a great way to teach your little ones to love and appreciate everything they enjoy about life, from small things to big things alike.' * Practical Parenting * 'Funny, easy to read, lovely to look at, and just great for committing to memory, helping to develop emergent reader's skills.' * Early Years Educator * 'A colourful adventure ... Lauren Marriott's illustrations are truly delightful ... A charmingly put together book perfect for little ones to enjoy reading alone.' * Primary Times * 'It's not difficult to see why this won the Scholastic New Zealand Award for Best Designed Children's Book. Silly and sweet ... Kat Patrick's tomato red cat loves a number of things, some stranger than others.' FOUR STARS * Big Issue * 'One read of this tale of a cat and his list of loves will inspire you and your little one to share what you love.' * Australian Mother & Baby *

Kat Patrick recently realised they never actually grew up, and so they've been trying to make a living as a writer ever since. Originally from the UK, they have written their way around the world, and after stints in New Zealand, Australia, Iceland, Paris and Patagonia, are now based in Glasgow. Lauren Marriott is, above all other things, a doodler. There was never any questioning her career path. Since graduating with a Bachelor of Design, Majoring in Illustration, she has made a successful living of doodling. Endlessly.