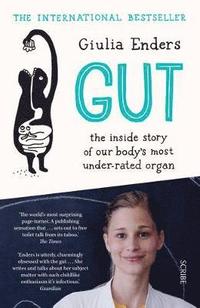 the inside story of our body's most under-rated organ

av Giulia Enders
Häftad Engelska, 2016-05-12
130
Köp
Spara som favorit
Kan levereras innan julafton!
Finns även som
Visa alla 1 format & utgåvor
A Sunday Times bestseller Our gut is as important as our brain or heart, yet we know very little about how it works and many of us are too embarrassed to ask questions. In Gut, Giulia Enders breaks this taboo, revealing the latest science on how much our digestive system has to offer. From our miraculous gut bacteria - which can play a part in obesity, allergies, depression and even Alzheimer's - to the best position to poo, this entertaining and informative health handbook shows that we can all benefit from getting to know the wondrous world of our inner workings.
Visa hela texten

'A publishing sensation that ... sets out to free toilet talk from its taboo' The Times 'Both funny and informative, a brilliant examination of one of our most complex - and underappreciated - organs.' The Observer 'Enders' gut manifesto calls on its readers to celebrate their lower bodies' achievements, rather than apologise for them.' Guardian 'Giulia Enders has a warm and simple prose style and her sister's illustrations are delightful.' -- William Cook Spectator 'Giulia Enders takes a no-nonsense approach to bodily functions ... [Gut] reads like a breeze ... you can totally see why it's been massive.' Grazia '[Enders is] a publishing sensation ... There is something compelling and refreshing about her curiosity and popular approach.' -- Simon Usbourne Independent 'A primer on poo ... Enders offers nuggets of wisdom on everything from the ideal position in which to evacuate your bowels to the science of faeces identification ... There are some fascinating insights here ... Food for thought.' Independent on Sunday '[Gut] had me laughing aloud.' -- Debora MacKenzie New Scientist 'The revelation that each of us depends on our individual living world, with far more inhabitants than there are people on earth, is surely sensational.' -- Clive Cookson Financial Times '[Enders] is utterly, charmingly obsessed with the gut, gut bacteria and poo. She writes and talks about her subject matter with such childlike enthusiasm it's infectious ... The perfect toilet book.' -- Annalisa Barbieri Guardian 'Enders, a German research microbiologist, obviously adores her subject matter ... [her] project is to show how those essential functions of the human body that some people may consider unseemly or unspeakable are in fact wondrous and worthy of exultation.' -- Karen Hitchcock Weekend Australian 'The world's most surprising page-turner.' -- Anna Murphy The Times 'Gut has more to offer than potty-language and a sense of humor ... It's hard not to be awed by Enders' vast knowledge of anatomy and microbiology and share her fascination with the 100 trillion tiny creatures in our tummies.' Beauty and Wellbeing 'An amazing romp down our alimentary canal.' New Scientist 'Best Books of 2015' 'A quirky tour of the gastro-intestinal tract.' Sunday Herald

Giulia Enders is a two-time scholarship winner of the Heraeus Foundation, and is doing research for her medical doctorate at the Institute for Microbiology in Frankfurt. In 2012, her presentation of Gut won her first prize at the Science Slam in Berlin, and went viral on YouTube. David Shaw works as a journalist for Germany's international broadcaster, Deutsche Welle, as well as translating from several languages, including German, Dutch, Russian, and French. He lives in Berlin.