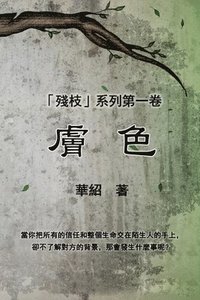 The Color of Skin

Book One of "The Crippled Branch" Series

av Hung Siu
Häftad Kinesiska, 2019-12-10
139
Köp
Spara som favorit
Skickas inom 10-15 vardagar.
Fri frakt inom Sverige över 159 kr för privatpersoner.
The true story about a Chinese man born during the dying days of the Qing Empire and his travel to the West. In 1937, when the Great War started, he had already been a decade abroad. While abroad, the situation in his country had continued from bad to worse. Impatiently, he waited for the situation to improve to return to his family, but his father told him to find another wife abroad.

The Color of Skin is a story about the difficulties and the unexpected things an immigrant encountered in a foreign environment. It is about his marriage to a foreign woman, his relation to his foreign-born children, his social life, and much more. It is about how terribly wrong a relation can become because of cultural differences between two persons with diametrically opposing backgrounds. It is a story about racial prejudices within a Chinese immigrant's family, East vs. West, ancient vs. immature.

This is a controversial and provocative story about odd couples living together beneath the same roof but not having anything in common besides their children and the business they owned. It is about the unforeseen consequences of putting one's trust and future into the hands of strangers without knowing their background.
Visa hela texten

Bloggat om The Color of Skin

Hung Siu, author of "The Color of Skin", was born in 1947, son-number-two from an elderly Chinese immigrant and a young Caribbean woman. Soon after a fire broke up in his parents' grocery store, his parents divorced. At that time, some of their children were primary school kids, others still attending kindergarten, and some still toddlers. Many years later, one of his father's relatives told him that his father was married to a Chinese woman and that the author has a Chinese sister, a sister the same age as his Caribbean mother. The relative also gave the author a letter to send to the Chinese embassy, which made it possible for him to find his Chinese family.

After knowing about his father's traditions, he exhumed the remains from an unhappy Chinese immigrant languishing in a foreign grave, an immigrant who had died more than three decades ago, to bring him home, to the ancestors' grave in China, thus complying with an ancient tradition, performing the ancient ritual for the Hakka's second burial. He then had the opportunity to study both sides of the family when he stayed with his Chinese sister in Malaysia, a woman older than his Caribbean mother. He visited the grave of his father's first wife, the wife who had been waiting for a husband who had promised to come back but never returned.

He visited the ancestors' village in China and discovered that his father had a resting place reserved for him. That the saying east is east, west is west, and twain will never meet, had truly become true in his family.