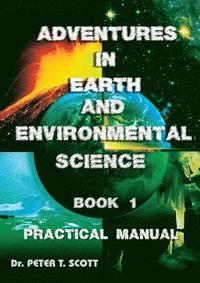 There are 50 experiments that cover all the required practical work for the Queensland and Australian Syllabus in Earth and Environmental Science, all of which have been thoroughly tested.

Here is the chance to get real with the studies and see the science in action.  There are of course relevant safety warnings for each experiment as well as guidance on the appropriate formal presentation of research.  This method is both explained and modelled.

There are 2 appendices and 55 diagrams all in black and white for clarity as well as permission and risk assessment  forms for teachers.
Visa hela texten

Dr Peter T Scott
Dr Scott has a passion for teaching and learning. At 5 years old he decided to be a teacher and set out to be one. Graduating from Sydney Teachers' College with a Certificate of Teaching in Junior Secondary Science he was appointed to a new school in Canberra, the Australian Capital Territory, at age nineteen as Acting Head of Science. Returning to his home state of New South Wales he continued as a teacher and then as a Head of department in the State's Department of Education. He completed his Bachelor of Science (Geoscience) from the University of NSW, Australia in 1974 by part-time studies and in 1976 was seconded to the University of New England, Australia, where he developed and lectured in their first program of science teacher training. Here he also began a part-time research Masters' degree in field geology, which he completed in 1982.

During this time he was Head of Science and Agriculture at Warialda High in the northwest of the state, operating a model department, giving in-service courses for teachers, and was active in and president of various teacher organisations.

Moving to the State of Queensland at the end of 1984, he started again as a probationary teacher but was soon promoted to Head of Science at Ipswich State High. In 1988 he accepted the position of Head of Earth Science at the prestigious Anglican Church Grammar School, Brisbane and also completed his research Masters' degree in Educational Administration from UNE. In 1999 he was awarded the degree of Doctor of Education for further research by the Australian Catholic University. During this time he also was an advisor to the State Government and was Head of the State Syllabus Committee in Earth Science.

In 2008 he was honoured by the award of State Teacher of the Year for services to Earth Sciences.

Peter had his first geology textbook published in 1975, and this was still used in schools until 2006 despite its being out of print for years. He currently travels, writes and is an educational consultant and researcher.

appendix a:  risk assessment of practical work and excursions