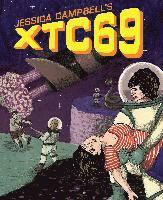 av Jessica Campbell
Häftad Engelska, 2018-06-07
127
Köp
Spara som favorit
Specialorder (osäker tillgång). Skickas inom 11-20 vardagar.
Gratis frakt inom Sverige över 159 kr för privatpersoner.
Commander Jessica Campbell of the planet L8DZ N1T3 and her crew are searching for men to breed with when they discover the last human on Earth, the cryogenically frozen Jessica Campbell. With a new, but familiar crewmember, the search for men continues, but will it be worth it?
Visa hela texten

"This oddball escapade delights from opening salvo to closing quip." - Publishers Weekly Praise for Hot or Not "With the way Campbell reduces Borduas's or Mondrian's abstractions even further, or captures what's cute about Calder's mien, she poo-poos macho ideas of artistic greatness, at the same time she showcases her own slyly unassuming skill." - Sean Rogers, The Globe and Mail "Hot Or Not: 20th-Century Male Artists,[...] is a hilarious, slyly subversive exploration of subjectivity, and the criticisms ultimately reveal more about the critic than they do the artists." - Oliver Sava, The A.V. Club "Hot or Not is a delightful, funny, and smart as heck book." - Emma Lawson, ComicsAlliance "We all need a break from the current onslaught of awful, and Campbell has given us one full of hope that, someday, all our world's horrors will be a distant memory." - Alenka Figa, Women Write About Comics "[Campbell] makes you laugh pretty hard even as she casts a critical net over everybody, including you." - John Seven, The Beat "Campbell skewers contemporary misogyny in these pages, but also praises the strength and perseverance of women and non-binary individuals who have to deal with this bullshit on a constant basis." - Oliver Sava, The A.V. Club "And you will eventually get all the answers in this ribald and ridiculous space burlesque. Just don't expect any hard sci-fi along the way. Lots of laughs and poking fun at Incels for sure, though, which is never a bad thing." - JR, Page 45

Jessica Campbell is from Victoria, BC and is an enthusiast of jokes, painting and comics. She completed her MFA at the School of the Art Institute of Chicago where she is a comics instructor. In 2016, she unleashed the art world and chauvinist skewering: Hot or Not: 20th-Century Male Artists.