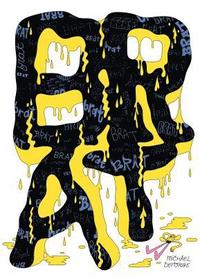 av Michael Deforge
Inbunden Engelska, 2018-10-25
199
Köp
Spara som favorit
Specialorder (osäker tillgång). Skickas inom 11-20 vardagar.
Gratis frakt inom Sverige över 159 kr för privatpersoner.
Michael DeForge refigures the portrait of a fading artist through his unique mockumentary-esque lens replacing art with delinquency to make this well-worn trope immensely fresh. It is not hard to see echoes of DeForge's own experience as one of comics' enfants terribles and subsequent transition into established star in the character of Ms. D, which makes this a kind of art comics Citizen Kane. This is our first sustained narrative from DeForge after a sequence of successful short story collections.
Visa hela texten

"DeForge's feints at both the cyclical appropriation of radical fury into mainstream culture, and the mistaking of mere temper tantrums for true rebellion make for smart and insightful surrealist satire." - Publishers Weekly "Brat has a great deal to say about 21st century fame. Just don't try this at home." - Mike Donachie, The Toronto Star "Michael DeForge's wonderful new graphic novel Brat mocks both celebrity culture and performances of rebellion." - Annette Lapointe, New York Journal of Books "DeForge is one of the great chefs of comic books, a brave, experimental force of creative nature that has rarely misstepped." - Gosh! Comics "DeForge is always pushing himself to explore how abstraction of form, space, and color alters tone and deepens character expression, and the intense disconnect from reality in the visuals brings new dimensions to his satirical storytelling." - Oliver Sava, The A.V. Club, 28 November 2018 "For years now Michael DeForge has been building these f*cked-up worlds that sit on top of and inside our own world all at once." - Ryan Werner, Heavy Feather Review "Brat proves that yes, DeForge is just as good as you thought he was." - Chris Mautner, The Smart Set "Brat is at its playful best when viewed rather than merely read." - Chris Gavaler, PopMatters "Michael DeForge-not so long ago hailed as something of a "phenom" himself, though certainly not without justification-asks a question that, at least to my knowledge, no one has in an any sustained, thoughtful manner to date: what happens when these social media celebrities get older?" - Ryan Carey, Four Color Apocalypse "Avid readers will still find all of the classic DeForge hallmarks here-themes of body horror and physical transformation, science-fiction scenarios interspersed with mundane scenes from the real world, in-jokes about artists and creatives, yet the work should be accessible to any fan of contemporary comics or post-modern literary fiction." - Anya Davidson, The Comics Journal

Michael DeForge lives and works in Toronto, ON as a cartoonist and commercial illustrator. His one-person anthology series Lose has received great critical and commercial success, having been nominated for every major comics award including the Ignatz and Eisner Awards.