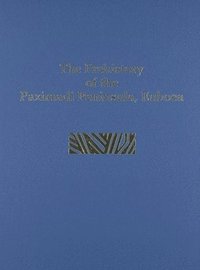 The Prehistory of the Paximadi Peninsula

av Tracey Cullen, Lauren E Talalay, Donald R Keller, Lia Karimali, William R Ferrand
Inbunden Engelska, 2013-10-15
610
Köp
Spara som favorit
The results of two related fieldwork projects are presented: a brief salvage excavation at Plakari (a Final Neolithic site near the modern town of Karystos) and a survey of prehistoric sites on the Paximadi peninsula (the western arm of the Karystos bay), both located in southern Euboea. These ventures were part of the larger mission of the Southern Euboea Exploration Project (SEEP), a multidisciplinary research program dedicated to the study of the Karystian past and which maintained a presence in southern Euboea for over 25 years. These projects have found that, contrary to what archaeologists once believed, southern Euboea was hardly an uninhabited and isolated region in prehistory.The inhabitants actively participated in the expanded maritime and social landscape that characterised the later Neolithic and Early Bronze Age in the Aegean, taking part in exchange networks of stone, ceramics, marble figurines and vessels, and possibly agricultural goods and metalwork.
Visa hela texten