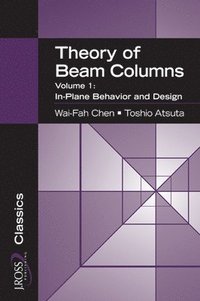 av Toshio Atsuta, Wai-Fah Chen
Häftad Engelska, 2007-05-01
629
Köp
Spara som favorit
Skickas inom 5-8 vardagar.
Fri frakt inom Sverige för privatpersoner.
This is the first volume of a two-volume work presenting the basic theoretical principles, methods of analysis in obtaining the solutions of beam-columns, and developments of theories of biaxially loaded beam-columns, and to show how these theories can be used in the solution of practical design problems. After presenting the basic theory the authors proceed to solutions of particular problems. Both refined and simplified design procedures, along with their limitations, are presented. It is left to the engineer to choose among them as he sees fit. Key FeaturesDiscusses the complete theory of beam-columns from the most elementary to the most advanced state of developmentVarious methods of solution are presented which are best suited for the types of beam-column problemsNumerical results are given in terms of tables, charts, and diagrams which furnish values of critical loads for various beam-column problems
Visa hela texten

Dr. Wai-Fah Chen was Professor and Dean of the College of Engineering at the University of Hawaii from 1999 to 2006. From 1976 to 1999, he was Head of the Department of Structural Engineering at Purdue University and George E. Goodwin Distinguished Professor of Civil Engineering; prior to that he taught at Lehigh University. The author of more than 300 peer-reviewed publications and author or co-author of 20 books, his primary areas of research are constitutive modeling of engineering materials, soil and concrete plasticity, structural connections, and structural stability. He received his Ph.D. from Brown University. He is a member of the U.S. National Academy of Engineering and an Honorary member of the American Society of Civil Engineers.Dr. Toshio Atsuta has been Vice President of the New Industry Research Organization, Kobe, Japan since 2003. The organization was established to revitalize the regional industry damaged through the big earthquake in Kobe in 1995. He graduated from the University of Tokyo in 1963 with his B.S. in Naval Architecture where he worked until 1965 as research associate in Civil Engineering. Then he went to Kawasaki Heavy Industries, Ltd. and worked for the Technical Institute until 2003 when he retired as director of the company. In 1969, Kawasaki sent him to Lehigh University. There he received his M.S. in 1970, and his PhD in 1972, both in Civil Engineering. His doctoral work at Lehigh University covered almost the entire subject of beam-column analysis, i.e., behavior of cross-sections and beam-columns in elastic-plastic regimes under in-plane or biaxial loading conditions.