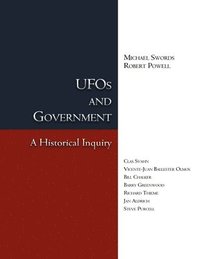 av Michael Swords, Robert Powell
Häftad Engelska, 2012-07-05
379
Köp
Spara som favorit
Skickas inom 10-15 vardagar.
Fri frakt inom Sverige för privatpersoner.
Finns även som
Visa alla 1 format & utgåvor
Governments around the world have had to deal with the UFO phenomenon for a good part of a century. How and why they did so is the subject of UFOs and Government, a history that for the first time tells the story from the perspective of the governments themselves. It's a perspective that reveals a great deal about what we citizens have seen, and puzzled over, from the "outside" for so many years. The story, which is unmasked by the governments' own documents, explains much that is new, or at least not commonly known, about the seriousness with which the military and intelligence communities approached the UFO problem internally. Those approaches were not taken lightly. In fact, they were considered matters of national security. At the same time, the story reveals how a subject with such apparent depth of experience and interest became treated as if it were a triviality. And it explains why one government, the United States government, deemed it wise, and perhaps even necessary, to treat it so. Though the book focuses primarily on the U. S. government's response to the UFO phenomenon, also included is the treatment of the subject by the governments of Sweden, Australia, France, Spain, and other countries. This large-format, fully illustrated book is the result of a team effort that called itself "The UFO History Group," a collection of veteran UFO historians and researchers who spent more than four years researching, consulting, writing, and editing to present a work of historical scholarship on government response to the UFO phenomenon. Michael Swords was the primary author of the United States chapters. The work was coordinated and edited by Robert Powell. Clas Svahn, Vicente-Juan Ballester Olmos, Bill Chalker, and Robert Powell contributed country chapters. Jan Aldrich was the primary content consultant, with additional content consultation and writing coming from Barry Greenwood and Richard Thieme. Steve Purcell was the primary photo illustration editor. From the foreword by Jerome Clark: "While UFOs and Government revisits an often unhappy history, the reading of it is far from an unhappy experience. The authors, eloquent, intelligent, sophisticated, and conscientious, provide us with the first credible, comprehensive overview of official UFO history in many years... Most of the current volume deals with U.S. military and intelligence responses to the UFO phenomenon, but it also features richly informative chapters that expand the story across the international arena. If you're looking for an example of a nation that dealt productively with the UFO reports that came its official way, you will take heart in the chapter on the French projects... From here on, every responsible treatment of UFOs and government will have to cite UFOs and Government prominently among its sources... this is the real story as accurately as it can be reconstructed in the second decade of the new century. I expect to keep my copy close at hand and to return to it often. While it cannot be said of many books, UFO-themed or otherwise, this is among the essential ones. Stray from it at your peril."
Visa hela texten