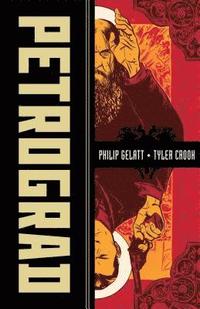 av Philip Gelatt, Tyler Crook
Inbunden Engelska, 2011-08-03
319
Köp
Spara som favorit
Skickas inom 5-8 vardagar.
Fri frakt inom Sverige för privatpersoner.
Introducing the untold tale of the international conspiracy behind the murder of Gregorii Rasputin! Set during the height of the first World War, the tale follows a reluctant British spy stationed in the heart of the Russian empire as he is handed the most difficult assignment of his career: orchestrate the death of the mad monk, the Tsarina's most trusted adviser and the surrogate ruler of the nation. The mission will take our hero from the slums of the working class into the opulent houses of the super rich... he'll have to negotiate dangerous ties with the secret police, navigate the halls of power, and come to terms with own revolutionary leanings, all while simply trying to survive! Based on historical documents and research, Petrograd is a tense, edge-of-your seat spy thriller, taking the reader on a journey through the background of one of history's most infamous assassinations, set against the backdrop of one of the most tumultuous moments in 20th century history.
Visa hela texten

LIBRARY JOURNAL-It took conniving Russian aristocrats numerous attempts with poison, knife, gun, fists, and icy water to murder mad monk Grigori Rasputin. But the lethal bullet was English, per recent findings. Gelatt fictionalizes the alleged shooter as Cleary, a young British intelligence agent who must supervise this assassination but finds himself an unwilling collaborator. While history presents a nasty-enough thriller to work with, Gelatt's command of character makes this attempt particularly successful. From hapless Cleary to the perverse yet likable nobles, the swaggering chief of the tsar's police, and Cleary's prickly Bolshevik crush, the characters seem to wear their dialog, not just speak it. Their grimy romanticism conjures an unsavory history when nobody had clean hands. VERDICT Gelatt never lets us forget that real people create history, and he asks, What if those people were us? Crook's semirealistic, sepia-washed art lends just the right aura of a dangerous time that we may want to glimpse but certainly not relive. Recommended for history buffs and thriller lovers, as well as a curative for those who think history is boring. With violence and some sexual situations. BOOKLIST-There aren't many murders with more intrigue attached to them than the 1916 assassination of Grigori Rasputin--poisoned, stabbed, shot, and drowned in short order. Gelatt turns this still-unresolved event into a tight, dialogue-heavy spy thriller built on evidence that the plot to kill the mad monk was stirred up by the British SIS, intent on keeping Russia at war with Germany. The hero of sorts is British spy Cleary, who uses his connections in the aristocracy to hatch the plot and his romantic dalliances with a young Bolshevik to help turn the revolution. Even with the inevitability of the outcome, the drama stays propulsive, shifting the focus to how Cleary can escape the tightening noose once he's left out to dry by his country and his Russian allies. Talented newcomer Crook, newly enlisted for Mike Mignola's B.P.R.D., drapes the period settings in moody shadows and grim orange hues, while the smart layouts and craggy-featured faces grind out tension by the pound. A sharply executed graphic novel, good for more than just historical espionage fans.--Ian Chipman