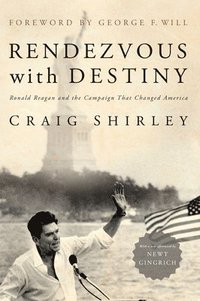 Ronald Reagan and the Campaign That Changed America

"We don't have to get very far in Craig Shirley's new book about Reagan to know that, yes, there is still a lot we didn't know about Reagan and how he came to the White House. . . . A fascinating book!" --Bob Schieffer, CBS "Has a you-are-there quality. [Shirley's] intention is to provide the reader with a definitive history of the 1980 campaign, and he succeeds. . . . A trove of colorful, dramatic tales. . . . Shirley gives us a lively ride on the electoral roller coaster." --Weekly Standard "As conservatives continue to try to reinvent themselves in the image of RR, it is helpful to have at our disposal this meticulously researched tome detailing how 'The Great Communicator' overcame the Republican establishment to oust an incumbent president----and ultimately, to change the world." --Politics Daily "A compellingly written, thoroughly documented treatise that is essential reading for anybody who seeks to understand what happened and why on Reagan's third try for the White House." --Washington Examiner "Well-written, filled with information, and a pleasure to read." --Doug Bandow "Best. Reagan. Book. Evah!" --Robert Stacy McCain "Rendezvous with Destiny offers a series of important practical lessons on how to run a presidential campaign, including coherent ideology and strategic nimbleness when circumstances change. Whether the reader is a Reagan fan or not, that takeaway alone makes Craig Shirley's book a top political read." --David Mark, Politico "Masterful . . . Shirley's books will be the definitive works on both Reagan elections." --Human Events "Enthralling . . . This book is full of true words, deep insights, long memories, and occluded details. . . . Shirley summons [the 1980 campaign] back to throbbing, vivid and immediate life." --David Frum "Offers more than a few pointers on what conservatives and Republicans should do in the future. And on top of that, it's an illuminating look back at the watershed 1980 election." --FOXNews.com "A new book by Craig Shirley tells the exhilarating story of how Reagan triumphed and made us believe it was morning in America again." --Eagle Forum "The book covers every aspect of the 1980 campaign: from Reagan's comeback after losing the Iowa caucuses to the behind-the-scenes staff battles and the mystery of who stole President Jimmy Carter's debate briefing books." --The Hill "Well-researched and well-written, and it gives insight into Reagan's journey to the Oval Office." --Roll Call "This exhilarating history . . . arrives, serendipitously, at a moment when conservatives are much in need of an inspiriting examination of their finest hour." --George F. Will, from the Foreword "A scandal that once looked like it could take down a president, but soon fizzled for lack of hard evidence, gets a closer look in a new book, Rendezvous with Destiny. . . . Shirley's new book sheds new light on the scandal. . . . The web of evidence Shirley weaves all leads to one man." --MSNBC.com "A much broader look at the campaign that elected Reagan . . . Shirley has gathered a wealth of evidence." --Politico "Provides the first inside look at the historic 1980 election . . . Shirley shows how close Reagan's campaign came to collapsing in the Republican primaries&#8212and how the candidate turned things around." --National Review Online "The genius of Shirley's work is to take stories we already know about, and fill in the details that take you, the reader, right into the room with the principals." --CQ Politics "Shirley puts to rest one of the great political mysteries: who stole Carter's debate briefing books? . . . Shirley also reveals that the Kennedy family had a long memory on Election Day. . . . When it came time for the election, virtually all of them voted for Ronald Reagan.&q

Craig Shirley is the author of the critically acclaimed bes tseller Reagan's Revolution, the first book detailing Reagan's pivotal 1976 challenge to President Gerald Ford in the Republican primaries. Shirley is also president of Shirley & Banister Public Affairs, an influential government relations and marketing firm. He has written for the Washington Post, the Los Angeles Times, and the Weekly Standard, among other publications, and in 2005 he was recognised as the outstanding alumnus of Springfield College. Shirley and his wife, Zorine, divide their time between their homes in Alexandria, Virginia, and ""Trickle Down Point"" on the Rappahannock River in Lancaster, Virginia.