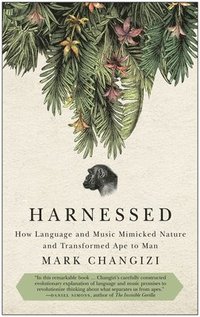 How Language and Music Mimicked Nature and Transformed Ape to Man

av Mark Changizi
Häftad Engelska, 2011-08-02
260
Köp
Spara som favorit
Kan levereras innan julafton!
The scientific consensus is that our ability to understand human speech has evolved over hundreds of thousands of years. After all, there are whole portions of the brain devoted to human speech. We learn to understand speech before we can even walk, and can seamlessly absorb enormous amounts of information simply by hearing it. Surely we evolved this capability over thousands of generations. Or did we? Portions of the human brain are also devoted to reading. Children learn to read at a very young age and can seamlessly absorb information even more quickly through reading than through hearing. We know that we didn't evolve to read because reading is only a few thousand years old. In Harnessed, cognitive scientist Mark Changizi demonstrates that human speech has been very specifically "designed" to harness the sounds of nature, sounds we've evolved over millions of years to readily understand. Long before humans evolved, mammals have learned to interpret the sounds of nature to understand both threats and opportunities. Our speech--regardless of language--is very clearly based on the sounds of nature. Even more fascinating, Changizi shows that music itself is based on natural sounds. Music--seemingly one of the most human of inventions--is literally built on sounds and patterns of sound that have existed since the beginning of time. From Library Journal: "Many scientists believe that the human brain's capacity for language is innate, that the brain is actually "hard-wired" for this higher-level functionality. But theoretical neurobiologist Changizi (director of human cognition, 2AI Labs; The Vision Revolution) brilliantly challenges this view, claiming that language (and music) are neither innate nor instinctual to the brain but evolved culturally to take advantage of what the most ancient aspect of our brain does best: process the sounds of nature ...it will certainly intrigue evolutionary biologists, linguists, and cultural anthropologists and is strongly recommended for libraries that have Changizi's previous book." From Forbes: "In his latest book, Harnessed, neuroscientist Mark Changizi manages to accomplish the extraordinary: he says something compellingly new about evolution...Instead of tackling evolution from the usual position and become mired in the usual arguments, he focuses on one aspect of the larger story so central to who we are, it may very well overshadow all others except the origin of life itself: communication. "
Visa hela texten

"...this remarkable book...promises to revolutionize thinking about what separates us from apes." - Daniel Simons, author of The Invisible Gorilla "...builds a compelling case, and his wry style of storytelling makes for an entertaining read." - Discover Magazine ...brilliantly challenges...view...that the human brain's capacity for language [and music] is innate..." - Cynthia Knight, Library Journal ...makes a persuasive case in this fascinating volume." - New Scientist "...simple but striking premise to show how language and music...harness our brains." - The Scientist ...this book might hold the key to one of humanity's longstanding mysteries..." - Stanislas Dehaene, author of Reading in the Brain

Mark Changizi is an evolutionary neurobiologist aiming to grasp the ultimate foundations underlying why we think, feel and see as we do. His research focuses on "why" questions, and he has made important discoveries such as on why we see in color, why we see illusions, why we have forward-facing eyes, why letters are shaped as they are, why the brain is organized as it is, why animals have as many limbs and fingers as they do, and why the dictionary is organized as it is. He attended the Thomas Jefferson High School for Science and Technology, and then went on to the University of Virginia for a degree in physics and mathematics, and to the University of Maryland for a PhD in math. In 2002, he won a prestigious Sloan-Swartz Fellowship in Theoretical Neurobiology at Caltech, and in 2007, he became an assistant professor in the Department of Cognitive Science at Rensselaer Polytechnic Institute. In 2010, he took the post of Director of Human Cognition at a new research institute called 2ai Labs. He has more than 30 scientific journal articles, some of which have been covered in news venues such as The New York Times, Wall Street Journal, Newsweek, and Wired. He has written three books, The Brain From 25,000 Feet (Kluwer 2003), The Vision Revolution (BenBella 2009), and Harnessed(BenBella 2011).