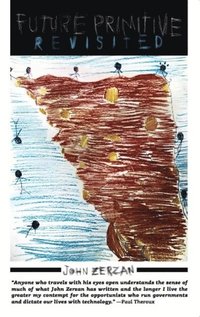 av John Zerzan
E-bok (EPUB - DRM), Engelska, 2012-05-29
119
Ladda ned
Spara som favorit
Laddas ned direkt
Läs i vår app för iPhone, iPad och Android
Finns även som
Visa alla 1 format & utgåvor
&quoteZerzan's writing is sharp, uncompromising, and tenacious.&quote Derrick Jensen &quoteJohn Zerzan's importance does not only consist in his brilliant intelligence, his absolute clearness of analysis and his unequalled dialectical synthesis that clarifies even the most complicated questions, but also in the humanity that fills his thoughts of resistance. Future Primitive Revisited is one more precious gift for us all.&quoteEnrico Manicardi, author of Liberi dalla Civilt (Free from Civilization) &quoteAnyone who travels with his eyes open understands the sense of much of what you have written, and the longer I live the greater my contempt for the opportunists who run governments and dictate our lives with technology.&quotePaul Theroux &quoteOf course we should go primitive. This doesn't mean abandoning material needs, tools, or skills, but ending our obsession with such concerns. Declaring for community, our true origin: personal autonomy, trust, mutual support in pursuit of all the joys and troubles of life. Society was a trapmassive, demanding, impersonal and debilitating from day one. So hurry back to the community, friends, and welcome all the consequences of such an orientation. The reasons for fear and despair will only multiply if we remain in this brutal and dangerous state of civilization.&quoteBlok 45 publishing, Belgrade As our society is stricken with repeated technological disasters, and the apocalyptic problems that go with them, the &quoteneo-primitivist&quote essays of John Zerzan seem more relevant than ever. &quoteFuture Primitive,&quote the core innovative essay of Future Primitive Revisited, has been out of print for years. This new edition is updated with never-before-printed essays that speak to a youthful political movement and influential writers such as Derrick Jensen and Paul Theroux. An active participant in the contemporary anarchist resurgence, John Zerzan has been an invited speaker at both radical and conventional events on several continents. His weekly Anarchy Radio broadcast streams live on KWVA radio.
Visa hela texten