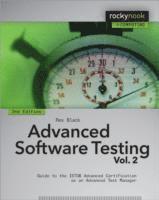 Guide to the Istqb Advanced Certification as an Advanced Test Manager

av Rex Black
Häftad Engelska, 2014-09-26
339
Köp
Spara som favorit
Skickas inom 5-8 vardagar.
Fri frakt inom Sverige för privatpersoner.
This book teaches test managers what they need to know to achieve advanced skills in test estimation, test planning, test monitoring, and test control. Readers will learn how to define the overall testing goals and strategies for the systems being tested. This hands-on, exercise-rich book provides experience with planning, scheduling, and tracking these tasks. You'll be able to describe and organize the necessary activities as well as learn to select, acquire, and assign adequate resources for testing tasks. You'll learn how to form, organize, and lead testing teams, and master the organizing of communication among the members of the testing teams, and between the testing teams and all the other stakeholders. Additionally, you'll learn how to justify decisions and provide adequate reporting information where applicable. With over thirty years of software and systems engineering experience, author Rex Black is President of RBCS, is a leader in software, hardware, and systems testing, and is the most prolific author practicing in the field of software testing today. He has published a dozen books on testing that have sold tens of thousands of copies worldwide. He is past president of the International Software Testing Qualifications Board (ISTQB) and a director of the American Software Testing Qualifications Board (ASTQB). This book will help you prepare for the ISTQB Advanced Test Manager exam. Included are sample exam questions, at the appropriate level of difficulty, for most of the learning objectives covered by the ISTQB Advanced Level Syllabus. The ISTQB certification program is the leading software tester certification program in the world. With about 300,000 certificate holders and a global presence in over 50 countries, you can be confident in the value and international stature that the Advanced Test Manager certificate can offer you. This second edition has been thoroughly updated to reflect the new ISTQB Advanced Test Manager 2012 Syllabus, and the latest ISTQB Glossary. This edition reflects Rex Black's unique insights into these changes, as he was one of the main participants in the ISTQB Advanced Level Working Group.
Visa hela texten

experience, Rex Black is president of RBCS (www.rbcs-us.com), a leader in software, hardware, and systems testing. For twenty years, RBCS has delivered consulting, outsourcing, and training services in the areas of software, hardware, and systems testing and quality. Employing the industry's most experienced and recognized consultants, RBCS conducts product testing, builds and improves testing groups, and provides testing staff for hundreds of clients worldwide. Ranging from Fortune 20 companies to start-ups, RBCS clients save time and money through higher quality, improved product development, decreased tech support calls, improved reputation, and more. As the leader of RBCS, Rex is the most prolific author practicing in the field of software testing today. His first book, Managing the Testing Process, has sold over 100,000 copies around the world, including Japanese, Chinese, and Indian releases, and is now in its third edition. His eleven other books on testing, Advanced Software Testing: Volumes I, II, and III, Critical Testing Processes, Foundations of Software Testing, Pragmatic Software Testing, Fundamentos de Pruebas de Software, Testing Metrics, Improving the Testing Process, Improving the Software Process, and The Expert Test Manager have sold tens of thousands of copies, including Spanish, Chinese, Japanese, Hebrew, Hungarian, Indian, and Russian editions. He has written over fifty articles, presented hundreds of papers, workshops, and seminars, and given about seventy-five keynote and other speeches at conferences and events around the world. Rex is the past President of the International Software Testing Qualifications Board and the American Software Testing Qualifications Board.