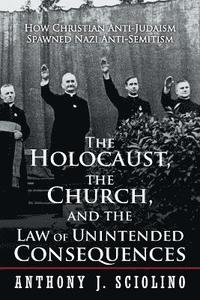 The Holocaust, the Church, and the Law of Unintended Consequences

av Anthony J Sciolino
Häftad Engelska, 2014-04-04
229
Köp
Spara som favorit
Skickas inom 10-15 vardagar.
Fri frakt inom Sverige för privatpersoner.
I admire greatly the way in which Deacon Sciolino has been able to absorb a vast amount of material and weave it into a coherent account of the R. C. Church
vis--vis the Holocaust. Telling the story from the inside has an especial relevance and importance.
Rev. Hubert G. Locke, cofounder of the Annual Scholars Conference
on the Holocaust and the Churches

The image of Jews as God-killers and their refusal to convert to Christianity has fueled a long tradition of Christian intolerance, hatred, and violence. It is no surprise, then, that when Adolf Hitler advocated the elimination of Jews, he found willing allies within the Catholic Church and Christianity itself.
In this study, author Anthony J. Sciolino, himself a Catholic, cuts into the heart of why the Catholic Church and Christianity as a whole failed to stop the Holocaust. He demonstrates that Nazisms racial anti-Semitism was rooted in Christian anti-Judaism. While tens of thousands of Christians risked their lives to save Jews, many moreincluding some members of the hierarchyaided Hitlers campaign with their silence or their participation.
Sciolinos solid research and comprehensive interpretation provide a cogent and powerful analysis of Christian doctrine and church history to help answer the question of what went wrong. He suggests that Christian tradition and teaching systematically excluded Jews from the circle of Christian concern and thus led to the tragedy of the Holocaust.
From the origins of anti-Judaism and anti-Semitism and the controversial position of Pope Pius XII to the Catholic Churchs current endeavors to hold itself accountable for their role, The Holocaust, the Church, and the Law of Unintended Consequences offers a vital examination of one of historys most disturbing issues.

Bloggat om The Holocaust, the Church, and the Law of...