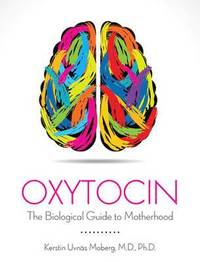 Oxytocin The Biological Guide to Motherhood

av Kerstin Uvnas Moberg
Häftad Engelska, 2016-09-13
383
Köp
Spara som favorit
What role does oxytocin play in the many changes that occur during pregnancy and breastfeeding designed to make mothers better mothers? How does birth, breastfeeding, and skin-to-skin contact affect oxytocin release? How do birth interventions--epidurals, Cesarean sections, oxytocin infusions, and medications--impact oxytocin release? And how does oxytocin release (or lack of) impact the mother and baby? After many years of researching oxytocin, author, physician, and researcher Dr. Kerstin Uvnas-Moberg presents compelling scientific data that demonstrates the important role oxytocin plays in motherhood. In this book Dr. Uvnas- Moberg describes how oxytocin helps mothers access an inborn female competence that helps them transition to motherhood and give birth more easily, feel better after birth, breastfeed with fewer problems, and establish a good connection with their children. She also explains the impact oxytocin release has on infants--helping them become better at handling stressful situations and impacting their future health. This book provides scientific data to demonstrate that oxytocin plays an important role far beyond stimulation of uterine contractions during birth and milk ejection during breastfeeding, including the following: * Oxytocin is a signaling substance in the brain that when released during birth, skin-to-skin contact, and breastfeeding induces important physiological and psychological adaptations in the mother and infant. * The way we give birth, handle, feed, and interact with our infants may influence the release of oxytocin and the development of the both short-term and long-term oxytocin-linked effects in both mothers and infants. * Medical interventions during birth may influence the release of oxytocin and the development of the oxytocin-linked effects. Anyone working with pregnant and breastfeeding mothers will find this book enlightening and thought-provoking. It will give you evidenced-based information to change practices to protect oxytocin release during birth and in the postpartum period and to better inform new mothers about the role oxytocin plays in pregnancy, birth, and breastfeeding; the importance of natural birth, skin-to-skin contact, and breastfeeding; and the impact of birth interventions.
Visa hela texten