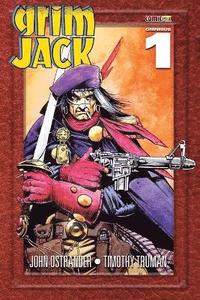 av John Ostrander, Timothy Truman
(1 röst)
Häftad Engelska, 2015-11-11
399
Köp
Spara som favorit
Skickas inom 5-8 vardagar.
Fri frakt inom Sverige för privatpersoner.
This new edition collects the stories of the original grim and gritty hard-boiled barbarian from Starslayer issues #10-17 and GrimJack issues #1-13, as originally published by First Comics between 1983 and 1985 by John Ostrander (Suicide Squad, Star Wars) and Timothy Truman (Conan, King Thor). These are the tales that introduced John Gaunt, GrimJack, to the graphic story pantheon. A mercenary in Cynosure, Gaunt rents out his sword-for-hire to clients - some good, some bad, some only out for themselves.

Blacjacmac, The Goddess, Major Lash, the Lawkillers, Spook, Mayfair, Jericho, Bob the Watchlizard and the inevitable Gordon Munden, the guy who runs the fabled Munden's Bar in the multidimensional world of Cynosure. They're all here, in the first Omnibus presenting all of their adventures just as Ostrander and Truman created them, thereby launching their meteoric careers and cementing the series as one of the first "independent comics" to achieve legendary status.

Get in on the action from the very beginning as ComicMix presents the man who invented the term "grim and gritty" - John Gaunt, a.k.a. GrimJack!