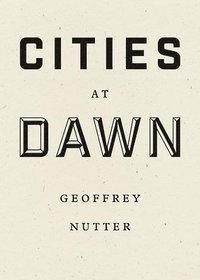 av Geoffrey Nutter
Inbunden Engelska, 2016-10-20
239
Köp
Spara som favorit
Lush, surreal, cinematic, and imagistically precise, Geoffrey Nutter paints the world into his fifth collection of poems. His poems display a consciousness in awe of all matter, be it organic, mechanical, industrial, ornithological, or sartorial. Iridescent and sparkling, his poems are ornate wonders of language, each their own contained ecosystem and civilization.
Visa hela texten

"Whatever's smuggled into these poems--the Petronas Towers, Afghanistan cliffs, Lugers and New Jersey--obeys the abstract logic at the heart of descriptive writing: the sweet ease of writing's intangibility, its virtual tease." --Adam Fitzgerald, The American Reader "Poems about strawberries, battleships, and elevators begin on track and morph into burgeoning blossoms. The poems unfurl smoothly and astonishingly, 'winding toward a pinnacle.'" --Jeffrey Cyphers Wright, The Brooklyn Rail "Nutter is a poet whose hand rests on the rudder, but who is also confident enough to let his poem-ships follow the current underneath. It's a movement similar to the way dreams progress...where the propulsive force of associative imagery leads each poem forward down the page." --Michelle Taransky, Time Out Chicago "Thank goodness for Geoffrey Nutter, whose poetry seems to be powered equally by sunlight, virtue, wonder, and humility...Geoffrey Nutter has handed us a book that records the motions of being human, enacting it in language that leads to a passionate feeling of overflow." --Rain Taxi "Like Italo Calvino meets Wallace Stevens meets William Gass with a dash of Kafka tossed in, Nutter's writing has one foot planted firmly in reality and the other in the fantastical world of the poet's imagination." --Michelle Aldredge, Gwarlingo

Geoffrey Nutter is the author of A Summer Evening (winner of the 2001 Colorado Prize), Water's Leaves & Other Poems (Winner of the 2004 Verse Press Prize), Christopher Sunset (winner of the 2011 Sheila Motton Book Award), and The Rose of January. He has taught poetry at Princeton, Columbia, University of Iowa, NYU, and the New School, and currently teaches Greek and Latin Classics and Cultural Studies at Queens College. He runs the Wallson Glass Poetry Seminars in New York City.

A Small Victorian Object Class E Ordinary Open High-Sided Wagon The Lapidary Crystal Billet-Doux The Man Who Was Used Up These Great Sentinels Canals Paneled with Light The Radiant Manifest These Are the Cliffs of Wonder The Mercurial Wheel The Door into Summer Portrait Rene Descartes The Harkening Knell Apology for Idlers A Pythian Ode The Blooming of Significance The New Atlantis Common Misnomers Cloud Iridescence Botanical Gardens Letter to a Friend The Mental Image The Strange Lives of Others The Cigarist Why Distant Objects Please Voyages Eddie Desiree Loves Aurora Baker The Topography of the Moon Six Records of a Floating Life And What of Z? Men with Mustaches Albany May I Join the Choir Invisible Prodigies My Name Is Dustin Hemp Everybody Else Cities at Dawn Winding Towers Marvell and Shenstone/Shenstone and Marvell