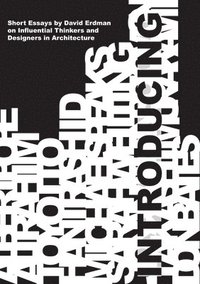 Short Essays on Influential Thinkers and Designers in Architecture

av David Erdman
Häftad Engelska, 2021-02-08
265
Köp
Spara som favorit
Skickas inom 7-10 vardagar.
Gratis frakt inom Sverige över 159 kr för privatpersoner.
Introducing-a collection of eighteen short essays developed by designer and educator David Erdman--suggests that short-form writing might serve as the proper vehicle for architectural discourse to flourish in the 21st century. Speculating that concise pieces of information attributed to the blogging and tweeting generation of architects is the contemporary format for the delivery of critical discourse, Erdman uses his essays to illustrate how an iterative approach to short-form writing might be the most efficient way for architecture to open new critical dialogues. This book further suggests that discourse is no longer (and will not be in the near future) delivered in extended, holistic polemical packages. Instead, Erdman posits that precise, undiluted snippets of discourse, which can be formed into broader strains of thinking by the user, or audience, simulate an "open source" information platform that is adept to the contemporary subject and architectural discipline, would be more suitable.
Visa hela texten

David Erdman is Chair of the Department of Graduate Architecture & Urban Design at Pratt Institute's School of Architecture, and he is a Rome Prize Fellow. He co-founded davidclovers in 2007, where he oversaw and designed over 20 completed projects in Hong Kong and elsewhere prior to repatriating in 2016. He had earlier co-founded servo in 1999, where he oversaw and designed projects in Los Angeles until 2006.