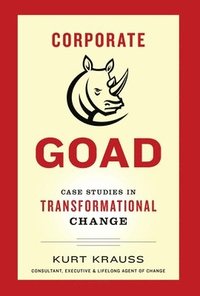 av Kurt Krauss
Inbunden Engelska, 2018-04-19
239
Köp
Spara som favorit
Skickas inom 5-8 vardagar.
Fri frakt inom Sverige för privatpersoner.
In business, change is a constant. All successful companies are making changes all of the time. And change agents are the people who develop, socialize, and lead such initiatives. They are the sine qua non of the transformation process. It is hard work for bright boys and girls. Corporate Goad: Case Studies in Transformational Change is designed to challenge and inspire the change agents of today. Kurt Krauss presents six indispensable coaching points and six key performance leverage areas, and brings them to life through thirty case studies of memorable assignments that he led over his long and successful management consulting career. Mr. Krauss draws the case studies from his work with companies and institutions such as Marriott Corporation, Target Stores, Johns Hopkins Hospital, Norwegian Caribbean Cruise Lines, and General Motors. This book is a must-read for all current and potential agents of change: executives, managers, project leaders, management consultants, business school students, and anyone else who is interested in the change management process.
Visa hela texten

Kurt Krauss spent his career leading major transformative change initiatives across a wide variety of companies, institutions, and organizations. He began his career working in production and inventory management for two companies in the Midwest. After receiving his MBA from Carnegie-Mellon University, he joined the firm of Booz Allen Hamilton, where he was elected to the partnership in 1984. In 1992, Mr. Krauss co-founded The Mead Point Group, a small management consulting firm focused on strategy, organization, and operations work in the service sector. His firm was purchased by the advertising giant Young & Rubicam in 1997, and he then served as Chief Financial Officer of Burson-Marsteller, the largest subsidiary of Y&R.