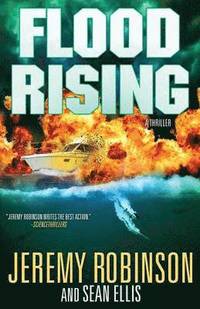 Fifteen year old Jenna Flood's discovery of a bomb-ticking down from sixty seconds-is the first in a series of explosive revelations that destroy her understanding of the world and her place in it.

Jenna believes she is an ordinary teenager, busy with schoolwork and helping her father run a Key West charter boat. But when a team of killers show up, intent on erasing her from existence, she learns the unbelievable truth: she is not who she thinks she is.

Alone and on the run, betrayed at every turn, Jenna's path takes her from sun-drenched Key West to the alligator-infested Everglades, the streets of Miami and the Caribbean islands. Along the way, brutal criminals, deadly assassins and the forces of nature conspire to end her life, unless she can rise to embrace an impossible destiny and unleash her own lethal potential.

Everything Jenna has been told about herself is a lie, and the truth is a secret that may destroy the world...or save it.

Jeremy Robinson and Sean Ellis, the bestselling team behind The Brainstorm Trilogy, Prime and Savage, have thrilled audiences with stories of science gone wrong and monsters on the rampage. Now they break new ground with a taut suspense thriller sure to appeal to fans of 24 and The Bourne Identity, with all the pulse-pounding, gut-wrenching action you've come to expect.
Visa hela texten