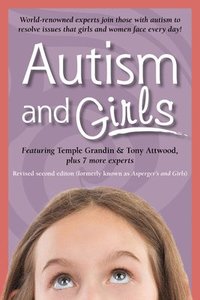 World-Renowned Experts Join Those with Autism Syndrome to Resolve Issues That Girls and Women Face Every Day!

av Temple Grandin, Ruth Snyder, Tony Attwood, Michelle Garnett, Catherine Faherty
Häftad Engelska, 2019-08-02
232
Köp
Spara som favorit
Finns även som
Visa alla 1 format & utgåvor
The revised and updated edition of the groundbreaking book Asperger's and Girls describes the unique challenges of females on the autism spectrum. In it, you'll follow the lives of women with autism through childhood, the social and academic challenges of the education system, and into the career and dating worlds. You'll also hear from top experts on crucial and often under-discussed subjects, including: Diagnosing girls with ASD Navigating the neurotypical social world Puberty, sexual health, and personal safety Independence, relationships, and marriage The importance of the right career And so much more. This book is a necessity for women with autism and those who love and support them. Direct advice from leading professionals and candid stories written by the indomitable women who have lived them send an important message: we are women with autism. Give us the right tools and we can change the world. First edition was winner of the Gold Award, Foreword Book of the Year.
Visa hela texten

This book gives an insight into the unique challenges of females on the autism spectrum." -Autism Eye

Dr. Tony Attwood is a practicing clinical psychologist with more than twenty-five years of experience. He has worked with over 2000 individuals of all ages with Asperger's syndrome. He presents workshops and runs training courses for parents, professionals, and individuals with AS all over the world, and is a prolific author of articles and books on the subject.Temple Grandin is an international lecturer on autism, a best-selling and award-winning author, an autism activist, a consultant to the livestock industry on animal behavior, and an engineer. She also created the "hug box," a device designed to calm those on the autism spectrum. The subject of an award-winning, 2010 biographical film, Temple Grandin was also listed in the TIME 100 List of the one hundred most influential people in the world. Dr. Grandin is one of the most respected individuals with high-functioning autism in the world. She presents at conferences nationwide, helping thousands of parents and professionals understand how to help individuals with autism, Asperger's syndrome, and Pervasive Developmental Disorder (PDD). She is the author of Emergence: Labeled Autistic, Thinking in Pictures, Animals in Translation, The Autistic Brain, and The Loving Push. One of the most celebrated -- and effective -- animal advocates on the planet, Dr. Grandin revolutionized animal movement systems and spearheaded reform of the quality of life for the world's agricultural animals. She earned her Ph.D. in animal science from the University of Illinois, and is a professor at Colorado State University. She lives in Colorado. Catherine Faherty works with children and adults with autism through the well-renowned TEACCH program in North Carolina. She is also a parent consultant and child therapist; consults to school programs; trains teachers and other professionals locally, nationally, and internationally; and runs social groups for children and adults with autism. She has written manuals used in TEACCH trainings, developed training models, and has written a workbook for children with autism and their parents and teachers, titled Asperger's: What Does It Mean To Me? Catherine Faherty resides in Asheville, North Carolina. Sheila Wagner, M.Ed., received her undergraduate degree in Education from the University of Wisconsin, Whitewater, and her graduate degree in Special Education from Georgia State University. Past experience in autism began at the Indiana Resource Center for Autism at Indiana University where she was an associate teacher, then demonstration teacher in the autism demonstration program and, later, an educational consultant to teachers and schools across the State of Indiana under the tutelage of Nancy Dalrymple, the first of many mentors. Currently, Ms. Wagner is an autism consultant, school consultant, teacher trainer, guest lecturer, and published author of numerous articles and books. Her books include Inclusive Programming for Elementary Students with Autism (1999), Inclusive Programming for Middle School Students with Autism/Asperger's Syndrome (2001), Inclusive Programming for High School Students with Autism and Asperger's Syndrome, and Understanding Asperger's: Fast Facts (2004). She also contributed a chapter to Asperger's and Girls (2006). She received the Autism Society of America's Literary Award for the book on inclusion in elementary schools, and was named the ASA's (Greater Georgia Chapter) Professional of the Year in 2002. Ms. Wagner lives in the Atlanta, Georgia area with her husband and son. Lisa Iland is a presenter and consultant in the autism community, and a student of speech and language pathology. She is a contributing author of the award-winning book Asperger's and Girls, and is a regular contributor to the Autism Asperger Digest magazine as columnist of the Sib Talk newsbite. Lisa specializes in teen social skills, Asperger's Syndrome, and sibling issues. Mary Wrobel is a speech-language pathologist with more than twenty years