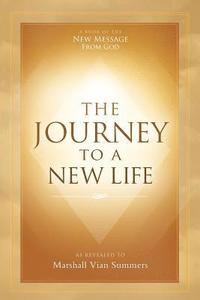 The Journey to a New Life

av Marshall Vian Summers, Darlene Mitchell
Häftad Engelska, 2019-04-01
129
Köp
Spara som favorit
The New Life opens before you the journey to discovering your higher purpose and greater relationships in life. With this, The New Life reveals the true cause of the inner confusion, isolation and suffering felt by people around the world and the pathway of resolution that the Creator of all life is now providing.

Here God is calling you to awaken from the dream and nightmare of Separation and to begin a new journey in life where you discover and build your connection to Knowledge, the deeper spiritual mind that God has placed within you to guide and protect you. This journey of awakening and return will bring you back to your original purpose for entering the world, the memory of those who sent you and the greater contribution you are meant to provide.

Here a sacred process begins that has the power to free you from the past and prepare you for a new and greater life in the future.
Visa hela texten

Marshall Vian Summers is the Messenger for the New Message from God. For over three decades he has been the recipient of a Divine Revelation given to prepare humanity for the great environmental, social and economic changes that are coming to the world and for humanity's contact with intelligent life in the universe.

In 1982, at the age of 33, Marshall Vian Summers was called into the deserts of the American Southwest where he had a direct encounter with the Angelic Presence, who had been guiding and preparing him for his future role and calling. This encounter forever altered the course of his life and initiated him into a deeper relationship with the Angelic Assembly, requiring that he surrender his life to God. This began the long, mysterious process of receiving God's New Message for humanity.

Following this mysterious initiation, he received the first revelations of the New Message from God. Over the decades since, a vast Revelation for humanity has unfolded, at times slowly and at times in great torrents. During these long years, he had to proceed with the support of only a few individuals, not knowing what this growing Revelation would mean and where it would ultimately lead.

The Messenger has walked a long and difficult road to receive and present the largest Revelation ever given to the human family. Still today the Voice of Revelation continues to speak through him as he faces the great challenge of bringing God's New Revelation to a troubled and conflicted world.

the gift of a new life

the journey to a new life

your purpose and destiny

building the bridge to a new life

courage and the will to prepare

preparing for a greater role in the world

you are here for a greater purpose