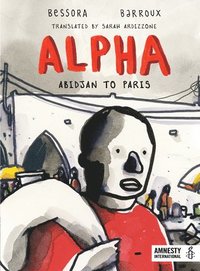 av Bessora, Barroux
Inbunden Engelska, 2018-05-01
239
Köp
Spara som favorit
Doctors Without Borders Prize PEN Promotes Award GLLI (Global Literature in Libraries Initiative) Translated YA Book Prize Shortlist CILIP Kate Greenaway Medal Longlist Library Journal "Best Book of the Year" selection School Library Journal "Best Adult Book 4 Teens" selection Comics Journal "Best Comic of the Year" selection "Barroux's raw illustrations and Bessora's matter-of-fact text express the inhumanity at the heart of the refugee crisis." --School Library Journal "Best Adult Book 4 Teens" citation Alpha's wife and son left Cote d'Ivoire months ago to join his sister-in-law in Paris, but Alpha has heard nothing from them since. With a visa, Alpha's journey to reunite with his family would take a matter of hours. Without one, he is adrift for over a year, encountering human traffickers in the desert, refugee camps in northern Africa, overcrowded boats carrying migrants between the Canary Islands and Europe's southern coast, and an unforgettable cast of fellow travelers lost and found along the way. Throughout, Alpha stays the course, carrying his loved ones' photograph close to his heart as he makes his perilous trek across continents. Featuring emotive, full-color artwork created in felt-tip pen and wash, Alpha is an international award-winning graphic novel supported by Amnesty International that received the PEN Promotes Award and Doctors Without Borders Prize, and was longlisted for the CILIP Kate Greenaway Medal. The U.S. edition is sponsored by Le Korsa, a nonprofit organization devoted to improving human lives in Senegal. Bessora is an award-winning writer of Swiss, German, French, Polish, and Gabonese heritage whose work has been anthologized in Best European Fiction. Barroux is a French graphic artist who spent much of his childhood in North Africa and whose illustrations have appeared in the New York Times, Washington Post, and Forbes.
Visa hela texten

Doctors Without Borders Prize PEN Promotes Award GLLI (Global Literature in Libraries Initiative) Translated YA Book Prize Shortlist CILIP Kate Greenaway Medal Longlist Library Journal "Best Book of the Year" & "Must-Have Graphic Novel for Black History Month and Beyond" selection School Library Journal "Best Adult Book 4 Teens" selection Comics Journal "Best Comic of the Year" selection Publishers Weekly "Hot Topic" selection Book Riot "Must-Read Comics about Brave People Who Aren't Superheroes" selection "Groundbreaking. . . . Stunning text." --Guardian "Bessora's prose and Barroux's illustrations join to illuminate the heart-wrenching journey of a West African refugee. . . . The reader is drawn into the refugee's experience and shares his agonizing odyssey via the graphic novel's blunt yet poetic language." --World Literature Today "The international refugee crisis is given a singular expression in this affecting work." --PEN America "Alpha is the story of everyone who bravely risks all they know for the hope of a better future. . . . Honest and direct rather than inspiring and romantic, Alpha gives a name and face to the multitudes in refugee camps all over the world. An important story for all of us to know." --New York Journal of Books "The text is blunt, matter of fact, but also painfully deep and poetic. . . . [The illustrations] effortlessly complement the text. . . . The washes of greys and blacks stain the page much like tears. This powerful book is an important one. It needs to be in the hands of every citizen of the world, so they can, for a moment, peer into the plight of others and, perhaps, reshape how refugees are viewed." --Literature, Arts and Medicine Database "To those who say that 'illegal' migrants are line-jumpers, [Alpha] . . . is a vivid retort." --The Common "Intimately told. . . . Masterfully composed. While immigration may be a contentious political issue, Alpha reminds us of the people behind the headlines: those who inhabit the smugglers' compartments in rickety trucks, pay for fake passports, and trust their lives to boats that are barely seaworthy, all in search of a better future for themselves and their families." --Foreword Reviews "As political debates and news reports on immigration proliferate, rare is empathetic reportage of the actual experiences and desperation these migrants face. . . . Alpha is that compassionate link. . . . 'You can't wash away the dust, ' Bessora writes. 'It's not just in the streets--the dust has settled in people's hearts.' Alpha: Abidjan to Paris draws a refugee with empathy and compassion, in an effort to lift the dust in people's hearts." --Shelf Awareness for Readers "A compelling tale. . . . Heartbreaking and timely." --Kirkus Reviews "The plight of the refugee is brought to brutally vivid life in this visual diary. . . . By homing in on the experience of one symbolic individual, Alpha humanizes the too-often faceless tragedy." --Booklist "Lays forth the many forms of devastation suffered by lives adrift while introducing memorable characters." --Library Journal "A migrant's harrowing journey to follow his wife and son to Paris from Cote d'Ivoire unfolds in an illustrated narrative that . . . movingly depicts Alpha's challenging passage." --Publishers Weekly "[Alpha] breaks from the traditional dynamic graphic novel format of panels and speech bubbles. Rather, Bessora's expressive words serve as captions to the half-page illustrations. . . . Subtle elements of collage are incorporated; small photographs, often of young children, peek into the fore- or background of certain scenes. . . . This stark, poetic story personalizes immigration. For all libraries." --School Library Journal (starred review) "[A] unique work in comics. . . . The fate of the im

Bessora is an award-winning author of Swiss, German, French, Polish, and Gabonese heritage whose work has been anthologized in Best European Fiction and has received the Feneon Prize and Grand Prix Litteraire d'Afrique Noire. Raised in Europe, America, and Africa, she has traveled extensively and her fiction is underpinned by extensive research and her training as an anthropologist. Alpha, forthcoming from Bellevue Literary Press, is her first graphic novel. She lives in Paris. Barroux was born in Paris and spent much of his childhood in North Africa. After studying photography, art, sculpture, and architecture, he worked as an art director in Paris and Montreal before beginning his career as an illustrator. His work includes the children's book Where's the Elephant?, longlisted for the Kate Greenaway Medal, the graphic novel Line of Fire, based on the diary of an unknown soldier from the First World War, and the graphic novel Alpha, forthcoming from Bellevue Literary Press. His illustrations have also appeared in the New York Times, Washington Post, and Forbes. He lives in Paris. Sarah Ardizzone is an award-winning translator from the French. She is the translator of the graphic novel Alpha, forthcoming from Bellevue Literary Press, and over forty other titles including The Little Prince Graphic Novel, a New York Times Notable Book. Ardizzone has twice won the Marsh Award for Children's Literature in Translation. She also curates educational programs, including Translation Nation, Translators in Schools, and the Spectacular Translation Machine. She lives in London.