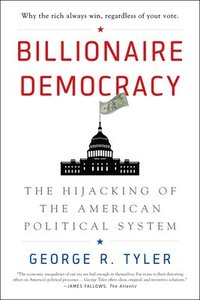 The Hijacking of the American Political System

av George R Tyler
Häftad Engelska, 2018-02-15
179
Köp
Spara som favorit
Skickas inom 5-8 vardagar.
Fri frakt inom Sverige för privatpersoner.
Finns även som
Visa alla 1 format & utgåvor
This isn't your America. No matter who the president is. We're told that when we vote, when we elect representatives, we're gaining a voice in government and the policies it implements. But if that's true, why don't American politics actually translate our preferences into higher-living standards for the majority of us? The answer is that, in America, the wealthy few have built a system that works in their favor, while maintaining the illusion of democracy. The reality is that the quality of democracy in the United States is lower than in any other rich democracy, on a par with nations such as Brazil or Turkey. In the US, voters have little influence on eventual policy outcomes engineered by lawmakers. Political scientists call it the income bias and attribute it to the power of wealthy donors who favor wage suppression and cuts to important government programs such as public education and consumer protection. It causes American lawmakers to compete to satisfy preferences of donors from the top one percent instead of the middle class. It's also why our economy has been misfiring for most Americans for a generation, wages stagnating and opportunity dwindling. The election of Donald Trump shocked the world, but for many Americans, it came as a stark reflection of mounting frustrations with our current system and anger at the status quo. We need to find a way to fix the way our government serves us. The only realistic pathway to improve middle-class economics is for Congress and the Supreme Court to raise the quality of American democracy. In Billionaire Democracy: The Hijacking of the American Political System, economist George R. Tyler lays out the fundamental problems plaguing our democracy. He explains how the American democratic system is rigged and how it has eroded the middle class, providing an unflinching and honest comparison of the US government to peer democracies abroad. He also breaks down where we fall short and how other rich democracies avoid the income bias created by the overwhelming role of money in US politics. Finally, Tyler outlines practical campaign finance reforms we can adopt when we finally focus on improving the political responsiveness of our government. It's time for the people of this nation to demand a government that properly serves us, the American people.
Visa hela texten

George Tyler is an economist who has extensive private- and public-sector exposure to international issues and foreign economics and political systems. Author of What Went Wrong he worked in the United States Senate for 18 years. Tyler served as senior economist to former Vice President Hubert H. Humphrey and to Sen. Lloyd M. Bentsen (D-TX). Appointed by President Clinton as a Deputy Assistant Secretary of the Treasury, Tyler has worked closely with top policymakers like Lawrence Summers and Treasury Secretary Timothy Geithner. His international exposure was intensified when working at the World Bank in Washington. Drawing on his international experience and contacts, Tyler co-authored the creation of the Drugs for Neglected Diseases initiative (DNDi) in 1999. He envisioned DNDi as a non-profit NGO conducting research on medicines for the neglected diseases of the developing world. The international aid group Doctors Without Borders (Medecins Sans Frontieres or MSF) endorsed the concept and provided critical seed funding to the Geneva-based NGO. MSF continues to support the $19 million budget in conjunction with the U.S. National Institutes of Health and private donors like the Gates Foundation. As a member of the DNDi audit committee, Tyler gained extensive exposure to Europe and economic systems across the globe. Coupled with his time in the U.S. Senate and Treasury, this experience gives Tyler an expansive perspective on the many variations of capitalism and democracy across the globe. Tyler is also treasurer of the international aid group Bikes for the World, which recycles American bicycles to Africa, Asia, the Caribbean, and Latin America.