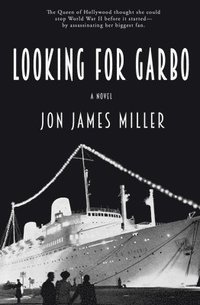 av Jon James Miller
Inbunden Engelska, 2019-05-07
269
Köp
Spara som favorit
Finns även som
Visa alla 1 format & utgåvor
"Blending hard-boiled noir and romance into a compelling historical tale, Looking for Garbo is filled with heart and action." ~ Foreword Reviews James Main has a film to make. Seth Moseley has a story to tell. Neither have any idea how looking for Garbo would change their lives. When documentary filmmaker James Main places an ad looking for anyone still above ground who knew movie goddess Greta Garbo, he's delighted when Seth Moseley, a salty old reporter, replies with the promise of an untold story of why the reclusive star left Hollywood at the height of her fame. Dying of emphysema, Seth tells the story of when he was a cut-throat paparazzo stow away aboard the S.S. Athenia, intent on getting a candid photo of Garbo to pay off his gambling debts. Instead, the newshound falls hard for the enigmatic star as soon as he meets her face to face. But all is not what it seems and when war in Europe unexpectedly breaks out while the Athenia is still steaming across the Atlantic, Seth has to single-handedly save the movie star in the middle of an open ocean swarming with Nazis. Their daring escape brings Garbo's film career to a premature end and shatters the lives of both star and reporter. And, unbeknownst to James, hearing their story decades later will change his own life forever.
Visa hela texten

"Miller's debut blends history and melodrama with mixed results. In 2000, documentary filmmaker James Main is obsessively researching the life of legendary screen goddess Greta Garbo when he encounters an old man, Seth Moseley, who has a doozy of a yarn about Garbo's secret scheme to prevent WWII by assassinating Adolf Hitler. Flash back to 1939; Seth, then a scrappy young reporter eager to pay off some gambling debts, stows away on the ocean liner Athenia, headed from New York to England, to get a story about the elusive Garbo, who's aboard. He soon discovers that the ship is full of disguised conspirators and is being stalked by a German U-boat. When war in Europe breaks out while the ship is in mid-journey, Seth's mission becomes a lot more complicated. Neither Seth's adventures nor James's emotional struggles are especially convincing, but readers who appreciate the charm and daffiness of old pulp magazines may have fun." Publishers Weekly February 2019 Drawing inspiration from Greta Garbo's comment that because Hitler was a big fan of hers, she might have had an opportunity to assassinate him, as well as reporter Seth Moseley's impromptu interview with Garbo aboard an ocean liner, Miller crafts a historical yarn that asks, What if Garbo had actually tried to carry out a plan to kill Hitler? Aspiring documentary filmmaker James Main travels with his crass boss to Connecticut to interview Seth Moseley, who is dying of emphysema, in the hope of extracting a story he's kept secret for decades. But when Seth's tale appears to be a hoax made up to get attention, James' boss fires him and storms off. When injured, James winds up in the hospital right next to Seth, where Seth reveals the true story of his hunt for Garbo on the S.S. Athenia, which involved a romp with a sultry Swedish barmaid, impersonating a porter, and eventually coming face-to-face with the movie star, along with several Nazis. Screenwriter Miller's first novel is an entertaining and spirited, old-fashioned caper. - Kristine Huntley - Booklist "Blending hard-boiled noir and romance into a compelling historical tale, Looking for Garbo is filled with heart and action." -- Foreword Reviews In Jon James Millers heartwarming noir Looking for Garbo , James is dying for a unique story to build a documentary around. Seth, whos dying of emphysema, lures James in with a tale centered around legendary actress Greta Garbo and her connection to Adolf Hitler. Seths story seems too good to be true, but after a freak accident leaves both men in the same hospital ward, James manages to pull the truth out of Seth. What follows is a strangely compelling adventure rife with violence, sex, and genre tropes. The foreword indicates that Miller drew upon historical facts and a personal connection for his text; he spoke with the real-life Seth. Expanding on the premise of Garbos connection to the dictator with a lively cast of characters, the story alternates between Seths romantic narration of his adventures aboard the SS Athenia and Jamess present-day drive to complete his movie and find an emotional resolution. Seth and James shine in their roles. Seth begins as a charming scoundrel, but his realness and flaws are revealed. James is fleshed out more slowly-most of all when he begins a relationship with his nurse. Over the course of the story, James and Seth-initially tied together by their adoration of Greta Garbo-connect in surprising ways, discovering similarities from mother issues to their longing for connection; these lead to a shocking, satisfying ending. Seths tale could almost be considered its own novel. As he recounts his journey with Garbo, the story moves quickly-with more speed, even, than his present day narrative with James. Its elements, including multiple double agents on board the ship and repeated blows to Seths head, are larger than life. Blending hard-boiled noir and romance into a compelling historical tale, Looking for Garbo is fil

Jon James Miller has always been passionate about literature and film and pursued a career in the latter at Ithaca College in upstate New York, earning a degree in cinematography. He moved to Los Angeles and found work as a researcher and segment producer on cable documentaries for A&E, Lifetime Intimate Portraits and The History Channel. In 2008, Jon won Grand Prize of the AAA Screenplay Contest sponsored by Creative Screenwriting Magazine for Garbo's Last Stand. The World War II set mystery inspired by true events went on to win the 2009 Golden Brad for Drama. But advice Jon received from legendary screenwriter and novelist William Goldman proved most valuable. After reading Jon's screenplay, Mr. Goldman said, "This is a great story, now go write the novel." Looking for Garbo is that novel, Jon's first. In addition to writing novels, non-fiction and screenplays, Jon is a frequent presenter of live webinars on the cra