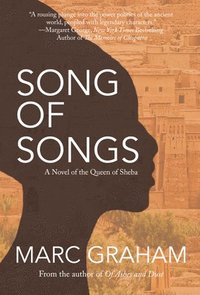 A Novel of the Queen of Sheba

av Marc Graham
Häftad Engelska, 2019-04-16
219
Köp
Spara som favorit
Lift the veil of legend for the untold story of Makeda, the Queen of Sheba, and Bathsheba, wife and mother of Israel's first kings. When Makeda, the slave-born daughter of the chieftain of Saba, comes of age, she wins her freedom and inherits her father's titles along with a crumbling earthwork dam that threatens her people's survival. When she learns of a great stone temple being built in a land far to the north, Makeda leads a caravan to the capital of Yisrael to learn how to build a permanent dam and secure her people's prosperity. On her arrival, Makeda discovers that her half-sister Bilkis (also known as Bathsheba) who was thought to have died in a long-ago flash flood, not only survived, but has become Queen of Yisrael. Not content with her own wealth, Bilkis intends to claim the riches of Saba for herself by forcing Makeda to marry her son. But Bilkis's designs are threatened by the growing attraction between Makeda and Yetzer abi-Huram, master builder of Urusalim's famed temple. Will Bilkis's plan succeed or will Makeda and Yetzer outsmart her and find happiness far from her plots and intrigue?
Visa hela texten

"A rousing plunge into the power politics of the ancient world, peopled with legendary characters." -Margaret George, New York Times Bestselling Author of The Memoirs of Cleopatra "With lyrical prose and a keen sense of time and place, Marc Graham sweeps us into this dramatic and unknown tale of rivalry, passion, and the quest for freedom behind the Biblical myth. Song of Songs resonates with historical truth, but never sacrifices the hearts of the fabled women who actually lived it." -C.W. Gortner, author of The Romanov Empress "A stirring novel of love, lust and vengeance, restoring the lost feminine voice to one of the great Biblical tales. You will never think of the Queen of Sheba the same way again." -Kamran Pasha, author of Mother of the Believers and Shadow of the Swords . "Graham delivers a gripping tale of treachery, betrayal, and hope, perfectly blended with vivid characters to adore and despise. A winning story worthy of high praise." -International bestselling author Wendy Terrien "Marc Graham regales us with a masterful retelling of a story we believe we already know. His prose breathes life into ancient characters and serves as a bridge across the gulf of history so we may experience their all too relatable motivations." -Michael F. Haspil, author of Graveyard Shift

Marc Graham studied mechanical engineering at Rice University in Texas, but has been writing since his first attempt at science fiction penned when he was ten. From there, he graduated to knock-off political thrillers, all safely locked away to protect the public, before settling on historical fiction. His first novel, Of Ashes and Dust, was published in March 2017. He has won numerous writing contests including, the National Writers Assocation Manuscript Contest (Of Ashes and Dust), the Paul Gillette Memorial Writing Contest - Historical (Of Ashes and Dust, Song of Songs), and the Colorado Gold Writing Contest - Mainstream (Prince of the West, coming from Blank Slate Press in Fall 2019). He lives in Colorado on the front range of the Rocky Mountains, and in addition to writing, he is an actor, narrator, speaker, story coach, shamanic practitioner, and whisky afficianado (Macallan 18, one ice cube). When not on sta