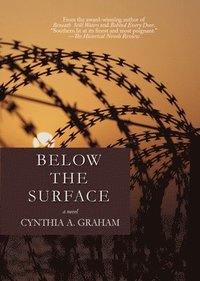 av Cynthia A Graham
Häftad Engelska, 2020-03-10
189
Köp
Spara som favorit
Hick Blackburn is falling apart. Last year, the world had been full of hope and promise after solving a murder and corruption case in nearby Broken Creek. Attorney Carol Quinn's uncle, the head of the Civil Rights Section of the Justice Department, had offered both Hick and Carol jobs in DC. Hick had a wife, two boys, and a baby on the way. Now, everything is different. It's as if hope and promise no longer exist. And then Quinn shows up again. This time, it's with a new case to solve and when Hick finds out his friend Father Grant is in the hospital and his church has been torched, he can't say no. But this time, corruption is the least of his problems.
Visa hela texten

"With Below the Surface , Graham delivers on all three of the things that every reader desires in a good murder mystery. First, you need to be sucked into the story to the point where you feel like you're right alongside Sheriff Hick Blackburn and U.S. Attorney Carol Quinn as they investigate the crime. Second, you want to be transported into a new and unexplored universe, a place and time far apart from your own in this case the Ozarks of northern Arkansas in the 1950s. And third, you hope it's more than just a straight forward detective story. That last point is where Graham really delivers the goods. Because in addition to solving the killing that backbones the plot, Below the Surface also examines the hatred, prejudice, misogyny and xenophobia that was prevalent at that time and that continue to plague America more than half a century later. To paraphrase Sheriff Hick Blackburn, there's an odd stirring in your heart and your imagination's caught from the first few pages of Graham's mightily compelling mystery." Joe Yogerst, author of Nemesis: A Novel of Old California "Set against the violent backdrop of desegregation during the mid-fifties, Graham's Hick Blackburn is looking worse for wear but reads better than ever before. He's got nothing to lose and more human than ever in this tightly written, fast-moving fourth installment. Graham's uncanny ability of making her down-to-earth hero rise to the occasion yet again sucked me in immediately. It's the best yet in the brilliant series." Jon James Miller, author of Looking for Garbo "Graham transports you into a world of poverty, powerlessness and religious conflict in a small rural town in Arkansas. Lots of plot twists and interesting characters with an ending that is both satisfying and poignant. A moving story and a good mystery." Charlotte Stuart, author of Survival Can Be Deadly "After a personal tragedy, a righteous Southern lawman wades warily into a racially fraught murder investigation. September 1955. Department of Justice attorney Carol Quinn visits Sheriff Hickory Blackburn ( Beneath Still Waters , 2016, etc.), of Cherokee Crossing, Arkansas, to request his help on an important case. Last year, Hick turned down an opportunity to work with Carol for the Civil Rights Section of the Department of Justice, staying in Arkansas to raise his two children with Maggie, his wife. Everything changed with Maggie's death; the grief-stricken Hick has mostly been going through the motions ever since. But so heinous is this crimethe shooting of black clergyman Father Grant, who is Hick's friend, and DOJ attorney Ernest Kelly, followed by the torching of Grant's churchthat Hick feels compelled to help. Kelly is dead, Grant wounded and severely burned. Nicodemus "Deem" Skaggs has confessed to the crime, but Carol is highly skeptical. Though a neighboring sheriff says that Skaggs was "born bad," an interrogation reveals a more complex personality and possibly a larger conspiracy. Skaggs' daughter, Lavenia, denies her father's avowed motive, that he sought revenge on Grant for convincing her to convert to Catholicism. When Skaggs is found hanged in his cell under mysterious circumstances, Carol's initial instincts seem validated, though proving she's right becomes harder. After taking care of Kelly's remains, she's supposed to return to Washington, but she can't leave her friend in the lurch. At length she and Hick find the key to the murder in a similar crime, decades old, revealed by a church elder. Hick's fourth case posits an all-too-believable scenario and nuanced, relatable characters." Kirkus Review