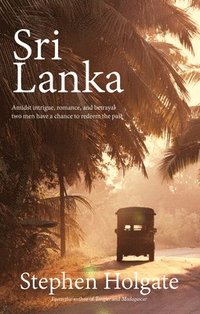 av Stephen Holgate
Häftad Engelska, 2020-04-28
199
Köp
Spara som favorit
A chance meeting at a dinner party in Paris turns the life of Philip Reid, an aging and cynical American diplomat, upside down, sending him back more than twenty years to when he had been a younger and better man. In those days, for a brief moment, Bandula, scion of the island's most powerful family, had been Philip's closest friend. Now, he finds his onetime companion bitter and humbled by life. In a tale marked by terrorist bombings, political assassination, romance, and intrigue, we follow the tragedies that lead Bandula to a life in exile and Philip to the attainment of dreams that lose their meaning even in the moment of their fulfillment. In their serendipitous meeting, both men gain a chance at redeeming the past.
Visa hela texten

A native Oregonian and current Portland resident, Stephen Holgate served for four years as a diplomat with the American Embassy in Morocco. In addition to his other Foreign Service posts, Mr. Holgate has served as a Congressional staffer; headed a committee staff of the Oregon State Senate; managed two electoral campaigns; acted with the national tour of an improvisational theater group; worked as a crew member of a barge on the canals of France; and lived in a tent while working as a gardener in Malibu. Holgate has published several short stories and successfully produced a one-man play, as well as publishing innumerable freelance articles. He is the author of Tangier and Madagascar, both inspired by his years of travel and experience living in foreign lands.