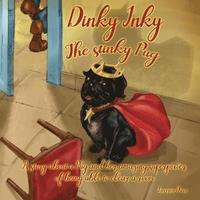 In this whimsically hilarious story, Inky delights in what she considers to be a phenomenal superpower. She can clear a room faster than any other quadruped with her gastrointestinal blasts.

Her family doesn?t consider this to be a superpower, but an unappreciated act of mischievous flatulence that immediately kicks in their gag reflexes.

Told poetically from her own perspective, Inky proudly describes how and when she strategically fires off stink bombs and gets away before being detected.

Pug, dog, and animal lovers of all sorts will enjoy this funny narrative because, after all, everyone with a pet has experienced the eking out what seems like a deadly fart!
Visa hela texten

Laurren Darr has been 'owned' by pugs since her first pug rescue of White Pines Tuttie when she was just six years old. Tuttie had never been out of a cage or even uttered a bark. She was the joy of Laurren's life until she left this world at the age of 15 (human years, of course!). This silly pug would let Laurren dress her, put clippy earrings on her, and even put lipstick on her. They'd spend hours tootling around the neighborhood dressed in their Sunday best, which is why Tuttie served
as the inspiration for the launch of the Pet Fashion Guild over thirty years later.

She understands the deep roots and connections created between humans and animals through fashion because of this kinship. Her book, "Lipstick On A Pug," won the Dog Writers Association Maxwell Medallion for 2015 Children's Book of the Year. Her publishing imprint, Left Paw Press, has printed numerous books on pet fashion, pug children's, medical, racing, and coloring. "PugDala Coloring Book," a mindfulness coloring book also won a Maxwell Medallion.

In 2013, Laurren combined her marketing experience and lifelong love of pet fashionology to launch the Pet Fashion Guild, an organization created to provide educational materials and
tools for pet fashion professionals. She's been named a "Paw-er Woman" by Fidose of Reality blog and was a 2015 & 16 finalist for Pet Industry Woman of the Year. In 2018, Pet Age named her a Woman of Influence. Laurren earned her pet fashion certification from Fashion Institute of Technology (FIT) in New York City in 2015.