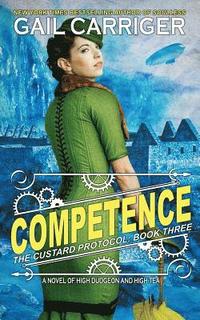 All alone in Singapore, proper Miss Primrose Tunstell must steal helium to save her airship, the Spotted Custard, in a scheme involving a lovesick werecat and a fake fish tail.

When she uncovers rumors of a new kind of vampire, Prim and the Custard crew embark on a mission to Peru. There, they encounter airship pirates and strange atmospheric phenomena, and are mistaken for representatives of the Spanish Inquisition. Forced into extreme subterfuge (and some rather ridiculous outfits) Prim must also answer three of life's most challenging questions:

Can the perfect book club give a man back his soul?

Will her brother ever stop wearing his idiotic velvet fez?

And can the amount of lard in Christmas pudding save an entire species?

For more from Gail Carriger, check out:

“carriger maintains a droll, tongue-in-cheek tone, and her protagonists are as concerned with witty banter and fashionable hats as they are with fighting for their lives.”

“blending steampunk and urban fantasy in a colorful alternate victorian england, carriger presents a grand cast of characters on a harrowing adventure that stretches from england to india.“

“behind the delightful whimsy and snarky observations, there is a great deal of heart and soul…”

“a character-driven romp with great world-building and delicious rapier wit that recalls austen and p.g. wodehouse.”

“this genre-bender will introduce fans of ally carter’s gallagher girls and jennifer lynn barnes’ the squad to a world of mechanical maids and flying machines while bringing a spy-school romp to readers of the weightier worlds of cassandra clare and scott westerfield.”

Gail Carriger writes comedies of manners mixed with paranormal romance (and the sexy San Andreas Shifter series as G L Carriger). Her books include the Parasol Protectorate, Custard Protocol, and Supernatural Society series for adults, and the Finishing School series for young adults. She is published in many languages and has over a dozen NYT bestsellers. She was once an archaeologist and is fond of shoes, octopuses, and tea.

1: a lioness in a hat and other concerns

2: a bad case of the dropsies

3: a merlion in a muaheoom

6: in which thomas aquinas is an absolute corker

8: a mystery, a fez, and an italian mathematician

11: our lord and saviour the spotted custard

13: on hives, haciendas and hijinks

14: the etiquette of proper introductions

15: weddings and their consquences

excerpt from Romancing the Werewolf