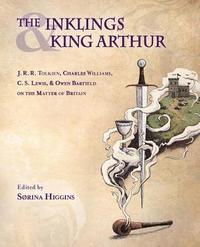 The Inklings and King Arthur

av Sorina Higgins
Häftad Engelska, 2017-12-22
369
Köp
Spara som favorit
Skickas inom 10-15 vardagar.
Fri frakt inom Sverige för privatpersoner.
In the midst of war-torn Britain, King Arthur returned in the writings of the Oxford Inklings. Learn how Tolkien, Lewis, Williams, and Barfield brought hope to their times and our own in their Arthurian literature.
Although studies of the "Oxford Inklings" abound, astonishingly enough, none has yet examined their great body of Arthurian work. Yet each of these major writers tackled serious and relevant questions about government, gender, violence, imperialism, secularism, and spirituality through their stories of the Quest for the Holy Grail. This rigorous and sophisticated volume studies does so for the first time.
"This serious and substantial volume addresses a complex subject that scholars have for too long overlooked. The contributors show how, in the legends of King Arthur, the Inklings found material not only for escape and consolation, but also, and more importantly, for exploring moral and spiritual questions of pressing contemporary concern." -Michael Ward, Fellow of Blackfriars Hall, University of Oxford, and co-editor of C.S. Lewis at Poets' Corner
"This volume follows Arthurian leylines in geographies of myth, history, gender, and culture, uncovering Inklings lodestones and way markers throughout. A must read for students of the Inklings." -Aren Roukema, Birkbeck, University of London
Visa hela texten

a gathering with an acknowledged bias toward and emphasis on charles williams, The Inklings and King Arthur offers new insights on the difficult and demanding Arthurian poetry of this least critically studied Inkling. But it has as well an impressive array of essays on all the preeminent Inklings—Tolkien and Lewis and Williams and Barfield—that will be a significant contribution to the study of their Arthurian works in particular and of twentieth-century Arthurian literature in general. —­Verlyn Flieger, Author of Splintered Light, A Question of Time, and Interrupted Music

in recent years, it has become increasingly clear that the arthurian legends and their world were of vital importance to the writing and thought of the major inklings. under sørina higgins’ enterprising editorship, this adventurous and illuminating volumes offers a wealth of insights—from theoretical, contextual, interpretative, and other viewpoints—which will move the study of barfield, lewis, tolkien, williams, and their immediate predecessors into new and exciting territory, showing that the inklings’ concern with the ‘matter of britain’ was motivated not by nostalgia but by urgent concern for the present and future. —grevel lindop, author of Charles Williams: The Third Inkling

The Inklings and King Arthur: Owen Barfield, C. S. Lewis, J. R. R. Tolkien, and Charles Williams on the Matter of Britain is a powerful collection of essays that fills a gaping hole in Inklings’ scholarship. While many readers have long noted the presence of Arthurian motifs and allusions in the works of the Inklings, few are aware of how extensive these connections are. Sørina Higgins has drawn together an impressive group of scholars who offer scholarly yet thoroughly readable essays covering the scope, depth, and influence of Arthuriana in writings of Barfield, Lewis, Tolkien, and Williams. This book should be on the shelf of all Inklings readers.

The Inklings and King Arthur is a very significant addition to serious study of the Inklings circle of C. S. Lewis, J. R. R. Tolkien, and their friends. It distinctively focusses upon the group rather than only on Lewis, Tolkien, or other members individually, as has often been the case. The circle is represented convincingly in featuring four of the shaping members, all important writers, and their common interest in King Arthur and the Matter of Britain as a living and breathing tradition. This theme is demonstrated to be an important key for unlocking the heartbeat of the informal group, and dispels the persistent myth that the Inklings were not part of, nor relevant to, the concerns of modernist writers after World War I. This deeply researched, sharply up-to-date, and well-unified collection of e...